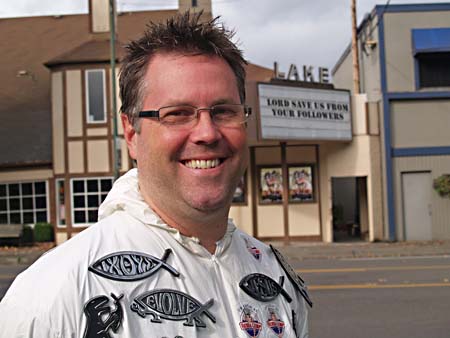 Lord, Save Us From Your Followers

This one’s a strange kettle of fish – Jesus fish, to be exact. It’s a Christian faith film but quite unlike any others you may have seen. Writer, TV executive, and now film director Merchant is on a mission, but he’s not out to proselytize among the heathens or anoint the spirits of the believers. Merchant, actually, has a bone to pick with Christians, and this movie is his platform. He wants to know why the gospel of love is dividing America. Merchant sees a collision of faith and culture in America where too many Christians preach a fear-based religion that excludes nonbelievers and others not regarded as up to snuff. Popular books such as Dan Brown’s bestsellers and the Left Behind series give the impression of Christians as apocalyptic doomsayers and cabalistic negativists. Christians have strayed from the path of Jesus and his religion of love, forgiveness, and charity. Merchant even takes the almost blasphemous stand of using ample clips from such famous non-Christians as Jon Stewart, Al Franken, and Bill Maher and stating they get several things right in their analyses. The filmmaker has a sure grasp of cinematic technique, and his film often has more in common with animated Monty Python cutouts, Church Lady skits, and ironic Stephen Colbert spoofs. Clips of all of these figures and such others as Bono, Pope John Paul II, and Nelson Mandela are used liberally throughout, as is footage from Rick Warren’s megachurch, BattleCry’s anti-gay-marriage rallies, and interviews with various Christian theologists. Merchant’s wildest episode include a religious game-show parody of Family Feud, but his most eye-catching stunt is his trek around the country dressed as the bumper-sticker man, who slaps all sorts of contradictory stickers on to a white jumpsuit and tries to engage people in conversation. (Viewers in Austin might recognize local political writer Lou Dubose, whom Merchant randomly engages in “man on the street” conversation in Times Square.) I suspect the impact of this film may be greater among its intended audience – devout Christians – than it will be on some of us more secular types. But its message – that people don’t have to agree on everything in order to work together for the common good – should be palatable to everyone. Although it’s somewhat messy in its organization and execution, Lord, Save Us From Your Followers is a great example of the modern essay film in action.

Lord, Save Us From Your Followers, Dan Merchant