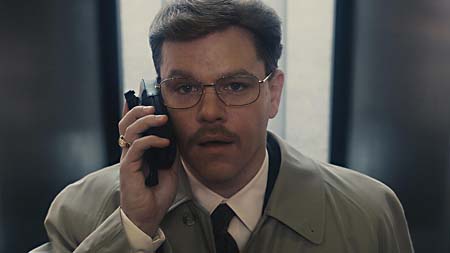 Although they share the same first syllable and both are movies about real-life corporate whistle-blowers, Soderbergh’s The Informant! could not be more different than Michael Mann’s The Insider, a dramatic thriller about a scientist/executive who exposes the lies of tobacco companies. The Informant!’s Mark Whitacre (Damon) is also a scientist and high-level executive, but Soderbergh’s thriller about Whitacre’s exposure of price-fixing in international agribusiness is shaped as a comedy or one-man caper. Although The Informant!’s screenplay (by Scott Z. Burns) is based on the identically titled autobiography of the real-life whistle-blower Kurt Eichenwald, the movie’s addition of an exclamation point to its title is revealing. That bit of punctuation tells us everything about the film’s tone, attitude, and perspective. Then, in case we still haven’t grasped the point, The Informant!’s opening credits sport the familiar language that warns us that the movie isn’t faithful to actual people and events – and caps its disclaimer with the words, “So there.” Soderbergh’s Whitacre is the mother of unreliable narrators. His ever-changing story and seeming motive for exposing the dirty secrets of his employer, Archer Daniels Midland, is the thread that holds the movie together. Ultimately, the film cares nothing about the evils of corporate price-fixing nor the exposure of bad guys; it functions not as a whodunit but, rather, a whydunit. Whitacre’s story constantly changes, and the deeper the FBI is drawn in and the more his wiretapping functions increase, the more inscrutable and unhinged Whitacre appears to be. As audience members, we are also privy to the interior ramblings of his mind, conveyed in a constant stream of voiceovers that, nevertheless, tell us nothing of Whitacre’s grievances and motivations but a great deal about his sundry trains of thought. Mostly, these voiceovers are idle but commonplace musings, though the audience will find more humor in these random expressions than will their narrator. Whitacre almost calls to mind a representation of Sinclair Lewis’ famous booboisie: middle-class Americans suffering from a self-deluding sense of self-importance. Sadly, that means that the film’s humor generally comes at the expense of its protagonist. This perception is furthered by the inclusion of comic actors such as Patton Oswalt, Dick Smothers, and Rick Overton in small roles as various officers of the court. Also a discordantly zingy and retro soundtrack is used for scene transitions, as if Henry Mancini and the Pink Panther were conspiring somewhere in the background. Damon is rock solid as the pudgy, toupé-wearing informant, as is Lynskey as his loving wife. The film also represents a return to more audience-friendly fare after Soderbergh’s recent forays into more theoretical filmmaking with Che and The Girlfriend Experience. Maybe Soderbergh felt as though he already did a straight-ahead version of this story with Erin Brockovich and therefore decided to revamp the tune in the key of Richard Lester.