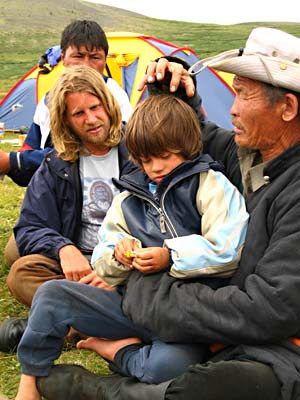 My yoga teacher likes to say, as she eyeballs my unlimber limbs, straining to contort in comical ways, that “it’s the journey, not the destination,” and those wise words might also serve as the message of this moving documentary film about one family’s experience with autism. The Horse Boy – which won the Audience Award at SXSW '09, under the more sonorous title Over the Hills and Far Away – documents the day-to-day struggles of an Elgin family to cope with their five-year-old son Rowan’s autism. Director Scott skillfully interweaves frankly shattering scenes of Rowan in endless tantrum, unable to articulate what ails him, with talking-head interviews that attempt to explain what’s going on with Rowan – in as much as medical science, still largely baffled by autism, is capable of doing. Experts such as the University of Cambridge’s Simon Baron-Cohen (cousin to comedian Sacha) and Temple Grandin, the animal science pioneer and a high-functioning autistic (as well as the subject of an upcoming HBO biopic starring Claire Danes, which was filmed locally) provide backgrounding that is crucial to understanding what comes next, which is the daring plan of father Rupert Isaacson, a travel writer and alternative medicine enthusiast, to seek healing all the way on the other side of the planet for Rowan, for whom a trip to the grocery store can be a nightmare. Encouraged by Rowan’s affinity for horses, Isaacson travels with his family to Mongolia, where horses are revered and shamanism is state religion; there, they plan to journey into Inner Mongolia to meet with eight shamans, then horseback up a 12,000-foot ascent to the Russian border, where a mystical reindeer herd congregates. (Rowan's mom, Kristin Neff, a professor at the University of Texas, is admirably game, considering she hates riding horses.) The Horse Boy is a staggering document of the lengths parents will go to for the sake of their child, and it can be an unnerving sight – Dad flogged by shamans, while Mom is asked to douche by the side of a stream (“You’ll Photoshop this out?” she asks the cameraman hurriedly as she gets down to it). The journey is hard on all of them: Almost as soon as Rowan shows progress in one direction, he makes a hard reverse in another. But in those fleeting moments when the viewer wonders if perhaps the parents are pushing too hard, they verbalize the same concerns themselves, in frequent, soul-bearing testimonies to the camera. (Still, one senses that “failure” – an especially nebulous term here, as is success – was not an option in Isaacson’s mind; according to a New York Times article, he optioned a pitch for his book of the same name, which was published this past April, before the family set out for Mongolia, something the film neglects to mention.) Isaacson narrates, and also produced and largely financed the project, so there’s zero objective remove to the film, but director Scott works that to the film's advantage for a deeply intimate and endlessly inspiring look at a condition the general public knows only at a remove. 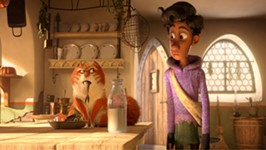