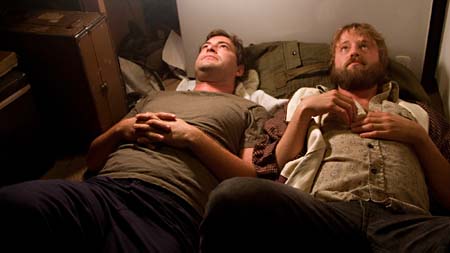 Ben (Duplass), a Seattle newlywed, seems to be contentedly motoring along life’s major landmarks – marriage, property, prepping for children – but that contentment, or its illusion, is shattered when Ben’s old college buddy Andrew (Leonard) shows up unannounced at his front door. Fresh off a sojourn in Chiapas, Mexico, and swaggering with tales of willing women and artistic schemes, Andrew is living the dream, or at least the dream according to Ben, a former Kerouac hound now fully domesticated and keeping time not to the Beat but to the work whistle. Ben, then, is primed for revolt – eager to reassert his individuality, to prove that partnership hasn’t dulled his edges – which is why he blows off dinner with wife Anna (Delmore), patient if unformed, and instead rumples his work khakis at a freewheeling house party with artists whom Andrew picked up at a coffeehouse. There, the two friends hear about Hump! fest, the annual amateur porn contest run by Seattle’s alternative weekly, The Stranger. Buzzed from the wine and weed, not to mention the contact high that comes from mingling with an art collective and slow-dancing with a lesbian (played by writer/director Shelton), Ben and Andrew jokingly float the idea of making their own porn … with each other. When they sober up, they shakily circle ’round the idea again, which turns out to be more or less the m.o. for the remainder of the film – a reshuffling scene to scene of the three leads and the different angles of attack they take on the film’s central question: If two straight dudes film themselves having sex, is it art? Is it a stunt? Is it sexual repression unleashed? Or a personal expression of individuality? Certainly Humpday – Shelton’s fourth feature in three years and the winner of Sundance’s Special Jury Prize – starts an interesting conversation, but I’m not sure how much it has to contribute, at least in its first two-thirds, which have more to do with fraternal resentment than the far more intriguing issues of sexuality and how far one can toy with human nature. Humpday is amusing in the soft-shoe way mumblecore films tend to be, rooted in the idiosyncrasies and occasional idiocies of conversational and physical tics, but its naturalistic aesthetic is chipped away by an inauthentic-seeming marriage between Ben and Anna, which in turn is stiltedly acted out by Duplass and Delmore. But Shelton’s film takes a quantum leap in its funny and fearless third act, when Ben and Andrew arrive at a motel room to shoot the porn. Suddenly, in its most confined setting yet, Humpday opens up into a deliciously, ambiguously keyed and choreographed pas de deux. As for that central question: Yep, it’s art, all right. One only wishes they’d gotten down to the business of it sooner. 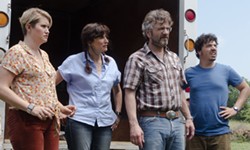 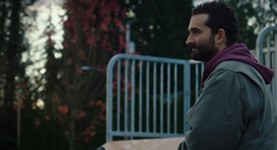