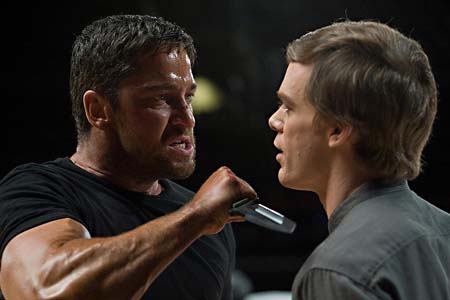 I had high hopes for this third directorial outing from former extreme sports cinematographers Neveldine and Taylor, but 24 hours after watching Gamer's nonstop fireballs and fragmented body parts, all that comes to mind is the late Jim McKay's old ABC’s Wide World of Sports opening, "Spanning the globe to bring you the constant variety of sport, the thrill of victory, and the agony of defeat!" There are plenty of thrills and absolutely no shortage of agony – whatsoever – strewn throughout Gamer, but this dystopian take on an American near-future where first- (or is that third-?) person-shooter video games and The Sims or Second Life social gaming experiments have evolved into their own corresponding realities is still considerably less of a thrillgasm than playing Frogger blindfolded. That has everything to do with Neveldine and Taylor's script, which strenuously attempts to imbue its harebrained and ridiculously ordnance-happy theatrics with a misplaced sense of pseudo-subversive social commentary. Said commentary has already been done, and done better (even in this new, allegedly more trenchant "meta" form) by everything from Death Race 2000 and The Running Man to Peter Watkins’ Punishment Park and Kinji Fukasaku's