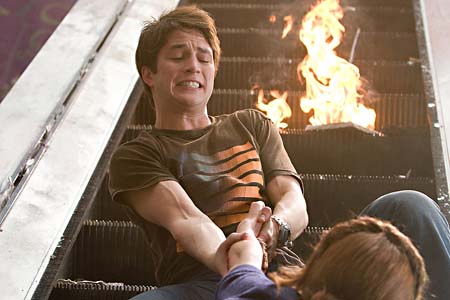 Committed Fangorians (i.e., fans of the gorecentric slick horror mag, as opposed to, you know, State Hospital subscribers) surely rue the day that the fine art of gooshy latex-and-Karo-syrup special effects were subsumed by splashy but transparently fake (and vastly cheaper) CGI mayhem. I know I do. The Final Destination franchise – this is the fourth installment – has a terrific premise but not much else. That premise – sundry teens and bystanders manage to escape a deadly catastrophe (plane crash, car crash, roller-coaster crash) only to find themselves stalked by the unseen hand of death, which picks off the shoulda/coulda/woulda-been-dead, one by one, in occasionally creative and always ghastly fashion. That Death itself is the killing entity – rather than an anthropomorphized death-surrogate, à la Halloween II – is in its own way a stroke of genius. It allows the filmmakers free rein to devise some of the most convoluted and elliptical set-pieces this side of Rube Goldberg. In that sense, the series offers more escapist, flesh-flecked fun than the Saw movies, which tend to leave you with a sudden urge to immerse yourself in the soul-cleansing baptismal font of early Disney animation, or, more depressingly, The Family Circus. Director Ellis, who previously helmed the best of the lot so far (Final Destination 2), returns to the cinematic blood trough but can't seem to get the pale rider to drink. Consider this destination a parody of a satire of a knowing wink, the horror equivalent of Monty Python's "Nudge, Nudge" skit. There's little point (okay, no point whatsoever) in mentioning either the characters or the actors who play them, as they're all disposable antiheroes. That said, The Signal's Welborn does pull off an amusing turn as a doomed, racist redneck, but everyone else involved seems to have wandered in from a lower-tier WB pilot. Following the rules – what there are of them – scrupulously but relying far too much on the aforementioned CGI work, The Final Destination is proudly stupid gore-for-gore's-sake hokum. It's also, unfortunately, about as mesmerizing as watching bread toast. Death be not proud, indeed. 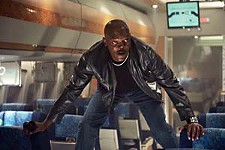 Snakes on a Plane
This solid little B-movie arrives cloaked in the dodgy garb of a fanboy phenomenon.