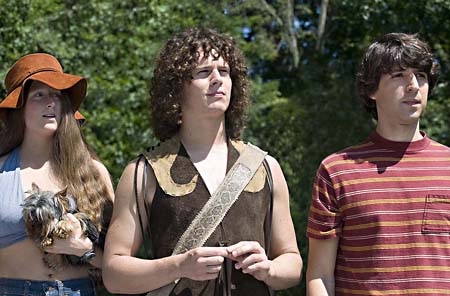 Four decades later, those "three days of peace and music" still hold an iconic spot in our collective psyche and nostalgia pocketbooks. It’s something of a cultural Rorschach test; everyone can see into the event and take from from it what they choose. The familiarity of the footage from the famed music documentary and Barbara Kopple’s more recent Woodstock films further preserve and disseminate the sounds, images, and gestalt for the descendants of the Age of Aquarius and anyone else who wants to grab a piece of the “garden.” Lee’s film is wise to steer clear of the music and staged happenings of the festival as there is little need to re-create them. In Taking Woodstock, wafts of music are only heard emanating from a distant stage; the subject matter is the behind-the-scenes story of some of what ensued in order to make the event happen. The film is based on Elliot Tiber’s 2007 memoir, Taking Woodstock: A True Story of a Riot, a Concert, and a Life, and was adapted for the screen by Lee’s longtime collaborator James Schamus. At the beginning of Tiber’s tumultuous summer of 1969, he was an interior designer who lived in Greenwich Village and witnessed June’s Stonewall riots, which kicked the gay rights movement into high gear. He also helped his parents (to whom he was still a closeted gay man) maintain their dilapidated Catskills hotel, the El Monaco, mainly by hosting plays and local festivals on the resort grounds and serving as president of the local chamber of commerce, the main issuer of permits. In July, when he read that the Woodstock concert was denied a permit in the nearby town of Wallkill, Tiber reached out to the promoters and hooked them up with Max Yasgur and his neighboring dairy farm. For weeks prior to the festival, the event crew bunked at the El Monaco. The film’s focus on one man’s story instead of the event itself is a solid narrative choice; the execution, however, is uneven and disappointing, especially coming from as accomplished a character portraitist as the director of Brokeback Mountain, The Ice Storm, and Eat Drink Man Woman. As Elliot (whose surname is changed to Teichberg for the movie), Martin is a serviceable presence, but the professional comedian lacks the emotional range to carry the movie on his shoulders. Elliot’s coming-out story is mostly shunted into the film’s latter half, and when it does emerge it is woefully conventional and diluted by other goings-on. Even Lee’s frequent use of split-screen images to convey the breadth of activity does little to expand the experiential palette. A detour into a VW van for Elliot’s acid trip with a couple of pansexual hippies (Dano and Garner) is also disappointingly conventional, and the sequence completely disrupts the film’s growing momentum. Other characters fare more successfully, particularly Schreiber as a former Marine cross-dresser named Vilma and Levy as Yasgur. Elliot’s parents, beaten-down Jake (Goodman) and penny-pinching Sonia (Staunton), start off interestingly but wind up as caricatures. Their worries, financial and spiritual, are mostly healed by the end of the movie, as is traumatized Vietnam War vet Billy (Hirsch, who is underused). And Elliot finally sleeps with a guy under his parents’ own roof. All will be right with the world if we just let the sun shine in and be ourselves, the film seems to say. But even Lee can’t help but end the movie with conventional portents of Altamont.