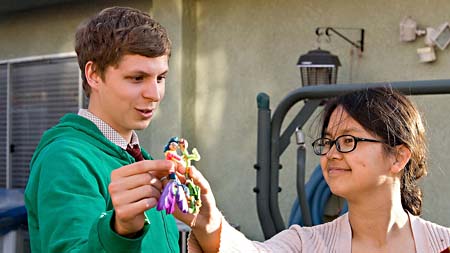 Paper Heart has riven critics right down its achy-breaky middle, and it's easy to see why. As a lightweight, documentaryish examination of the mysteries of the human heart, it's fascinating and sweet without becoming overtly cloying. Ultra-introverted mumblenerd comedian Yi (Knocked Up) is so goofily, painfully shy that her onscreen persona – essentially the same as her offscreen persona, or at least that's what we're led to believe – is hard to resist. It's like watching a wallflower, painfully but patiently, pull herself away from the shadows and onto the dance floor of her high school prom against her better judgment but with a willpower that's surprising to watch blossom. In case you haven't heard yet, Paper Heart is a faux documentary that blurs the line between staged, improvised, and "real" events as Yi, a self-confessed nonbeliever in the Church of the Sacred Heartthrob, meanders her way around the country interviewing various couples about their thoughts on true love and whether or not it really exists. Yi and director Jasenovec pull off some remarkably untwee sequences throughout; Yi created a series of striking, cuddly-cute, cut-and-paste puppetry sequences that recall The Science of Sleep in their dramatic usefulness and overall sense of quirkiness. But things get a bit bumpy – and semiscripted – when Cera ("playing" Michael Cera) arrives and promptly falls for Yi, creating a meta-romance within the anti-romance of the greater reality of the film. To make matters stranger (or quirkier, depending on your proximity to Park City, Utah), Yi and Cera really were a couple at some point preceding and perhaps during the filming of Paper Heart, which makes viewing what might have been a perfectly fascinating film about l-u-v into both something more and something less. Yi and Cera's doe-eyed festival of awkward feints and parries isn't nearly as interesting as the interviews with real-life lovebirds that surround it, and when Cera cries foul on account of the perpetual cameras and boom mics that seem to be sabotaging his "relationship" with Yi, you're going to find yourself siding with him (or, you know, the character of "Michael Cera"). It's a neat, sweet experiment in meta-documentary filmmaking overall, but like Yi's own heart, it sabotages itself in the process and becomes another casualty of too-close scrutiny. Like comedy, love is best enjoyed when it's not viewed through the lens of a metaphoric microscope.

'Paper' Trail
From Edtv to Last Tango in Paris: the cinematic simpaticos of Paper Hearts 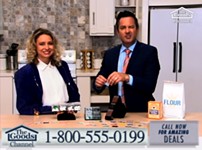 VHYes
Bizarro tribute to camcorder culture is silly and profound