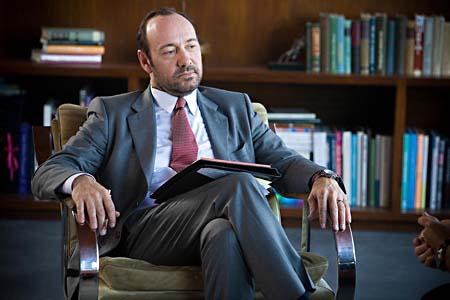 A well-chosen cast props up this otherwise shallow story about a therapist (Spacey) who turns to pot and booze in the wake of a personal crisis. Unlike last year’s The Wackness, which also ventured into marijuana-fueled “physician, heal thyself” territory, Shrink is not a comedy, although that doesn’t mean the film is without humor and laughs. The role of Dr. Henry Carter is one of those parts that is perfectly suited to Spacey’s sardonic line delivery. (The film is also produced by Spacey’s Trigger Street Productions.) Still, the clients who pass through his doors are sketchy constructs, and the way in which their lives all entangle while away from his office pushes credibility. In light of the catastrophe that has occurred in his life, Carter has lost faith in his ability to help others cope, and his popular book on happiness (No. 7 on The New York Times’ bestseller list) seems to him a cruel self-mockery. His patients represent a predictable array of self-indulgent Hollywood types, and as such, what most of them require is a stint in rehab rather than weekly visits to Carter’s office. Then his father (Loggia), who is also a shrink, tosses him a new patient, a young girl (Palmer) whose problems he suspects mirror those of his son. Another relative (Webber), an aspiring screenwriter, furtively gloms on to the girl’s life story as grist for a screenplay. Roberts plays a Tinseltown talent agent who suffers from growing germophobia, while two of his clients (Huston and an unbilled Williams) are stereotypical Hollywood bad boys. Plemons (Friday Night Lights), as Carter’s pot dealer and de facto Greek chorus, has the only role in the film that seems uncharted and fresh, though the appearance of Gore Vidal in a cameo also comes as a startling surprise. The film’s conclusion is anticlimactic and unsatisfying, but maybe that’s a faithful replication of the psychiatric experience: a quiet shutting of the barn door once the horse has already galloped away from the stable. 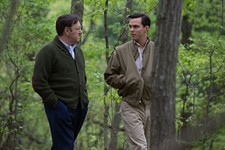 Rebel in the Rye
The early life of J.D. Salinger is explored