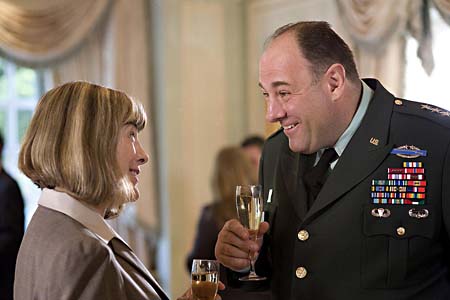 Political vitriol, when dispensed with razored, rapier aplomb, is a kind of magic, a spellbinding hex-agony of barbed-wire jabs, feints, and outright skewerings. In the real world, it's the off-the-record lingua franca of statecraft, which, by its very definition, involves the manipulation of others via a) dialogue and discourse or b) the rattling of MIRV-able sabers. Both are shocking and awfully, giddily exhilarating to experience in this deliciously bleak, black political satire from British director Armando Iannucci. (He created the equally surreal Steve Coogan series I'm Alan Partridge.) Set within the corridors of power (Washington, D.C.) and the hallways of powerlessness (London) during the lead-up to an unspecified Middle East conflict, the inciting event in this particular loop is an offhand nonremark by the UK's minister for development, Simon Foster (Hollander). Foster, a cultured dishevelment and a man far too polite for the shitstorm that befalls him, offers up an ill-chosen metaphor on wars and how unforeseeable they can be – an entirely accurate comment, of course – which is then picked up by the rabid international media and parlayed into the kind of inadvertent bombshell that rapidly metastasizes into major news. The fact that Foster was speaking on an entirely different subject during the interview is instantly forgotten, and suddenly war is imminent, or, at the very least, unforeseeable. The British PM dutifully shuttles Foster, his brand new and very young adviser Toby (Addison), and Foster's explosively, poetically foulmouthed boss, the PM's director of communications, Malcolm Tucker (Capaldi), off to Washington where, in the film's central (and accurate) conceit, they are not only not in the loop in the mounting "war crisis" but are, indeed, no more than "room meat." No one in the White House gives a fig what these overdry little Brit politicos may have to say, least among them the Rumsfeldian Linton Barwick (Rasche). Iannucci keeps his large cast bobbing and weaving and bouncing off each other with masterful skill – the obvious comparison is to the supercontrolled chaos of Robert Altman – but the real stars, and the best reason (out of many, admittedly) to see In the Loop are the screenwriters, five in all but chief among them Iannucci, Jesse Armstrong, and Simon Blackwell, who give the film the filth-laden buzz and hum of a David Mamet script gone furiously funny (the film is adapted from the BBC TV series The Thick of It). The steady stream of scatalogically creative epithets that flow from Tucker's maw – almost all of them aimed at Foster – are alone worth the price of admission. Add to that the scabrous, impious weaselry on display amongst these so-called statesman and In the Loop achieves a raunchy sort of glory. Yes, it's a tad depressing because, you know, so much of it is bang-on accurate in terms of the lead-up to the Iraq debacle and No. 10 Downing Street's involvement in the U.S.' dirty little war game-gone-real, but even so, and at the very least, you'll come away with fully stocked quiver of shiny new razor-tipped arrows of anger, suitable for deployment at both bar mitzvahs and break-ups. Lucky you. 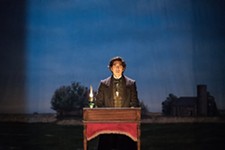