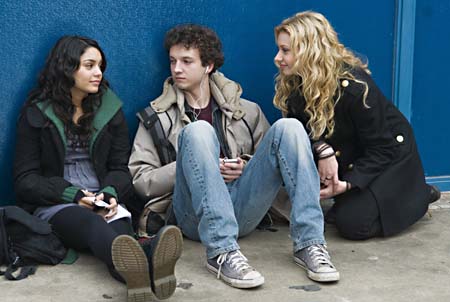 From the beginning of time, or at least the roots of rock & roll, outcast teens have found comfort and companionship in music where none is to be had in their peer circles. Bandslam takes that idea and literalizes it: The first lines of the film are, “Dear David Bowie,” in one of many e-mails 15-year-old Will Burton (Connell) will write to his rock god. Will is a loner and, in the eyes of his classmates, a loser, which is why his sympathetic single mom (Kudrow) moves them at the film’s beginning from unforgiving Cleveland to a fresh start in New Jersey. At his new school, Will is still Will – a shy, music-obsessed kid unversed in social strategizing – but he is quickly latched onto by two very different girls: a blond-tressed former cheerleader named Charlotte (Michalka), who has burned all bridges with the A-list crowd, and Sa5m (Hudgens), a dry wit smirking her way through the high school horrordrome. (“The five is silent,” Sa5m deadpans, low and slow due to a childhood stutter.) Both girls pack some powerful pipes, which will come in handy for a citywide battle of the bands called Bandslam, the anticipation of which drives the film (which was shot in Central Texas and features local bands). Will becomes a sort of benign Svengali, putting together the hiply titled band I Can’t Go On I’ll Go On – an apt summation of any misunderstood high schooler’s survival mantra – while also fumbling toward a romantic relationship with Sa5m. Will courts her in his own way, which includes a blissful interlude where the two break into the seminal, now-shuttered Bowery club CBGB. It’s a setting that would seem to hold more sentimental freight for the adult filmmaker, Graff, and his co-writer Josh A. Cagan, but then one remembers that in the age of the Internet, any teen can be not only savvy but a specialist in crumbling monuments to rock. Bandslam plays like a spiritual companion to last year’s Nick and Norah’s Infinite Playlist – goofier, flabbier, and less artful, but possessing the same joie de vivre of youth reveling in rock. Bandslam is also considerably tamer when it comes to its teen romancers; a couple of chaste pecks won’t turn off the preteen fans of Disney-anointed Hudgens and Michalka (or their parents). Both are fine – Hudgens, especially, shows spark in the more interesting role – but they’re top-billed in name alone: Bandslam belongs to Connell. He has the unruly 'fro and endearing shamblingness of a young Daniel Stern, and he ably brings to life that rarest of cinematic qualities: decency. In the climactic battle of the bands, Will faces every adolescent’s worst nightmare – an auditorium packed with chanting prats, unified in mockery of him – and through his own cunning and good-heartedness turns it into a moment of triumph. It’s an elating moment, and an uncommon one: Will’s triumph doesn’t come from taking down his classmates but by bringing them up to his own level, and it’s perfectly in tune with this special little film’s own commitment to – again, that unsexy but most fundamental quality – decency. Camp
After watching Todd Graff’s sunshiny ode to all things musical and teenaged and sexually tormented, I began to develop serious doubts as to whether or ...