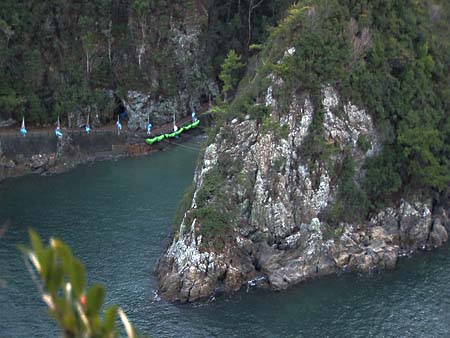 “The dolphin’s smile is nature’s greatest deception,” notes one of the speakers in this marvelously made agitprop documentary that enlightens, horrifies, and is a call to action to protect dolphins from mass slaughter. Because they always look like they are smiling, no matter their circumstances, we tend to anthropomorphize dolphins and assume they are in a constant state of happiness. The Cove exposes the dark secrets that underpin the world’s dolphin mania, whether it’s our enjoyment of the animals performing circus tricks in aquariums, the swimming-with-dolphins industry, or the government recruitment of the sea mammals’ intelligence, communication, and sonar abilities for military applications. The focus of Psihoyos’ film is the town of Taiji, Japan, an old whaling town that turned exclusively to the capture and sale of dolphins once an international moratorium was placed on whaling in 1986. A dolphin sold to a zoo or aquarium is said to bring in $150,000. But in order to capture the few that are deemed worthy to sell, tens of thousands are captured and then slaughtered like roadkill, trapped in the wrong place at the wrong time. Using ancient but primitive roundup methods, the Taiji fishermen herd the dolphins into the titular cove where the dolphins are cornered while the trainers on shore select the ones they want, and the remainder are stabbed and clobbered to death. As the waters of the cove turn blood red, you find your own blood curdling at the sight. The Cove, however, is much more than a timely eco-rant; it is a fascinating exercise in documentary filmmaking. “We try to do the story legally,” Psihoyos says in The Cove’s opening, but Taiji’s extreme secrecy about its dolphin hunts makes that impossible. The filmmaker thus resorts to covert means. He assembles what he characterizes as an Ocean’s Eleven-style team of divers, former military skirmishers, and mold makers from Industrial Light & Magic, who design rock camouflages for cameras. Psihoyos has a good eye for stirring shots and also makes grand use of thermal imagery and night-vision photography in addition to the usual array of cameras and lenses. The filmmaker is also a good storyteller and cohesively weaves many investigative tangents into the whole. Unfortunately, no contrasting opinions are given credible voice in the film, not that the lucrative dolphin-entertainment industry would have been likely to take part. The heart of The Cove belongs to Ric O’Barry, the man who captured and trained all the dolphins that played TV’s Flipper. Feeling responsible for the show which spawned our blithe mass attraction to dolphins, O’Barry has devoted the last several decades to atoning for his original sin. He is a tireless advocate for the dolphins, and his devotion to exposing the secret dolphin kills has made him the scourge of Taiji. By the time we see him parading about with a TV screen showing footage of the killing tacked to his chest, he is like a man emblazoned with a large scarlet letter. Whether we help him shoulder some of the blame in time to save dolphins from extinction remains to be seen.