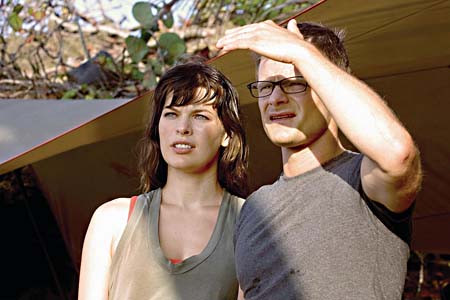 Director Twohy may have been born and bred in the Hollywood hills, but you wouldn't know it from his résumé and this above-average thriller, both of which easily could have fit into the recent doc about Aussie exploitation filmmaking, Not Quite Hollywood. (And that's a good thing.) Long before he chronicled Vin Diesel's Riddick, Twohy was churning out pseudo-exploitation fare, such as The Arrival ("You'll believe Charlie Sheen is a radio astronomer!"), while simultaneously penning the script for the big-budget seafaring wipeout Waterworld and (sort of) mainstreaming his career. A Perfect Getaway, however, is a smartly paced and ultimately purely exploitative head trip that's a lot of fun if you can get past the third-act meltdown and Zahn's, um, far-ranging performance. If anything, A Perfect Getaway recalls late-Seventies/early-Eighties Aussie fare such as Long Weekend, Road Games, and any number of Brian Trenchard-Smith films, minus the nudge-nudge/wink-wink down-underisms and with a far higher budget (and some truly breathtaking cinematography courtesy of Mark Plummer, whose last notable film was Kevin Spacey's claustrophobic directorial debut, Albino Alligator). Zahn and Jovovich play newlyweds Cliff and Cydney, who are spending their honeymoon traipsing around igneous outcroppings of Hawaii. Determined to follow a treacherous trailhead on the island of Kaua'i, they first encounter a pair of seemingly dodgy hitchhikers before embarking on their main trek and hooking up with yet another couple: testosterone-overloaded Nick (Olyphant) and his Southern belle girlfriend, Gina (Sanchez). As the quartet starts off, climbing over sheer, vertiginous drops and lolling in idyllic waterfalls, word arrives that still another couple (this film is nothing if not an exercise in duality) has been found butchered on the main island. Meek Cliff – whose day job as a Hollywood screenwriter provides more than a few recursive chuckles – debates turning back, as the unknown killers have been described as a "couple" and are still, apparently, at large. Could they be the hitchhiking couple who keep turning up, just out of frame? Or is it their newfound trail buddies, who both seem to know their way around edged weaponry and grin way too much for Cliff's comfort? Twohy, who also wrote the screenplay here, ratchets up some seriously nail-gnawing suspense; A Perfect Getaway is, in its own delightfully silly and manipulative way, one of the most effective paranoid thrillers of the new millennium. That doesn't make it a great movie by a long shot – the entire third act is an exercise in manic, flashbacky histrionics – but Zahn and Olyphant's mismatched machismo and the bizarre mystery at the heart of the story do score high marks for exceptional and thoroughly engrossing weirdness. And seriously, this would make a terrific double bill with Colin Eggleston's Long Weekend. 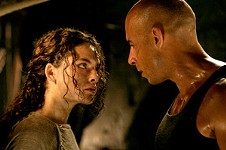 The Chronicles of Riddick
Vin Diesel revs up the sci-fi franchise.