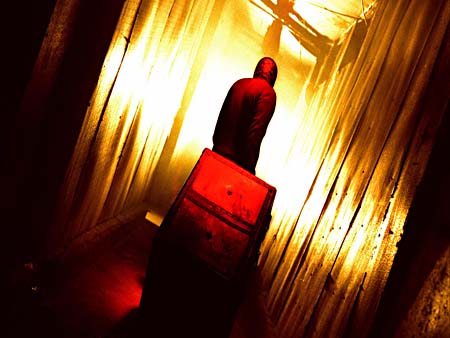 Co-written by Marcus Dunstan and Patrick Melton with an eye toward the crimson-drenched ultraviolence of the Saw films, The Collector gets off to what appears, at first, to be a whole new tack on the rapidly bleeding-out horror subgenre handily labeled "torture porn." Stewart plays Arkin, a seemingly nice enough handyman/loner with a troubled past and an even more troubled future who has been hired to beef up the security at the pricey-looking mansion of the wealthy and entirely unsympathetic Chase family, headed by growly husband Michael (Burke) and Botox-injecting wife Victoria (Roth). The Chases are on their way out of town for a weekend getaway with their precocious tweener daughter Hannah (Collins); rebellious teen offspring Jill (Zima, of Californication) opts to stew, pout, and otherwise stay behind in favor of nailing some boyfriend action while the cats are away. The twist here arrives with Arkin's backstory: He's an ex-con, a professional burglar with a skill set which includes not only breaking and entering but also safecracking. As it turns out, his estranged wife is desperate for cash to pay off some unidentified loan sharks who have promised to make her life a living hell (although it already seems pretty hellish to begin with) if their usurious outlay isn't repaid in full by midnight that very night. Arkin, a housebreaker with a heart of gold – much is made of his dedication to his own young daughter – opts to burgle the Chases’ home and retrieve a fist-sized gemstone he knows is secreted in an upstairs safe. The film kicks into Saw-style overdrive when, in the midst of cracking the combination, Arkin discovers he is not alone, and a far worse sort of home invader, the titular Collector (Fernández, sporting a bizarre full-head mask that looks as though it's made entirely of scorched marshmallows) has arrived to install some unspecified home improvements of his own. These include, in no particular order, a series of Rube Goldberg-esque mantraps secreted around the house. Cue the family's unexpected return, and you have, well, a butcher's dozen of top-notch gore effects, some occasionally suspenseful cat-and-mousery between Arkin and the Collector, and a whole lot of mangled rich people. Unfortunately, what you don't have is much of anything in the way of explanatory backstory (outside of Arkin). We never learn who – or what – this Collector is or what, exactly, he collects or even his motivation for slaughtering the already insufferable Chase family. Plot holes abound, one of the most egregious of which is the entirely relevant question of how the Collector managed to booby-trap the house in what seems like only a few hours while the family was away. Motivation, means, and madness are often just flat-out ignored in favor of some seriously deafening sound design and director of photography Brandon Cox's Saw-influenced visuals, which makes the whole film look as though it was shot through a particularly nasty cataract. This is Dunstan's feature debut, and both he and co-writer Melton have Project Greenlight's Feast on their screenwriting CVs, as well as entries 4-7 of the Saw films, but if anything, The Collector ends up feeling like a series of leftover gore gags and audio stingers from those earlier, freakier horror shows. It'll probably get your date to crawl into your lap (or ask for some earplugs), but The Collector feels like the final, welcome nail in the bizarrely popular torture-porn coffin.

The Collection
This follow-up to the horror/torture film The Collector seeks to mold a new franchise.