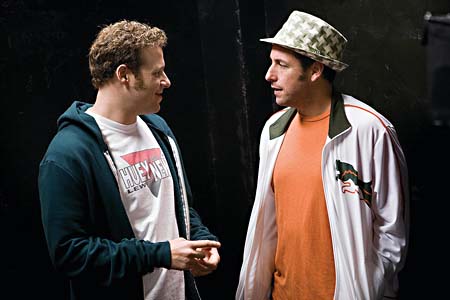 “Do you ever get tired of playing the same songs over and over again?” a young comic named Ira (Rogen) asks the singer-songwriter James Taylor, who has just watched Ira’s set. “Do you ever get tired of talking about your dick?” Taylor snips back. Apatow, of course, has built a miniempire on dick jokes, and Funny People, the writer-director’s bid at something more grownup, just as obsessively tugs at the male genitalia for laughs. But even the raunchiest Apatow film has more than a sideline interest in relationships that go beyond the one between the cock and the balls – The 40-Year-Old Virgin and Knocked Up both had sincerely felt love stories at their cores – and in Funny People Apatow brings the serious stuff of mortality and human misery to the forefront. Rogen uses his Charlie Brown slouch here to good effect as Ira, a stand-up comedian struggling with the rigors of the circuit and his own crippling insecurity. Early on, Ira is hired by his comic hero, George Simmons (Sandler), as a sort of His Guy Friday, supplying jokes, fresh Diet Cokes, and moral support as George muddles his way through a leukemia diagnosis and the spiritual crisis it inspires. Rogen has limited range – his mouth tends to curl up, as if he’s ever on the verge of breaking character – and Sandler shies away from the dramatics, too, quick to go to the goofy voice or crude riposte. But Apatow has cannily built in a fail-safe: These are comedians, a wounded breed famed for its itchiness around empathy or open sentiment. They riff because that’s who they are, and it’s a more than valid entry point into Apatow’s exploration of two men tumbling toward intimacy. It’s a satisfying exit that proves more elusive. Funny People has a wide, unwieldy scope, and its dual narrative focus has the effect of neither feeling fully formed. There are very funny detours, surely informed by Apatow’s own time in the Hollywood trenches, into the comedy circuit, the laughably disposable prime-time sitcom, and the dichotomy between comic elders and their brash successors. (A hit parade of funny people passes through the film, from an opening home video of a very young Sandler prank-calling Amex as Janeane Garofalo and Ben Stiller cackle in the background to cameo bits from Andy Dick, Sarah Silverman, and Ray Romano and larger parts from new guns Ansari and Hill.) Apatow also sets a lovely sequence in Marin County, where George goes to woo the one that got away, Laura (played by Mann, Apatow’s wife; their children also co-star). Mann, whose sharpness can be misdirected into shrill, is deeply moving as a wife and mother tempted to rearrange her life for a man who appears, in the face of death, to have rearranged his own. In this subplot, Apatow takes on complicated dynamics that are happily absent of the undercurrent of male rage that marked his earlier works (he’s also lessened his irritating tendency toward too-topical humor). He’s rewriting his own songbook here, in the key of James L. Brooks, a master at that tricky mix of humor and heartfelt. Brooks knows how to make the funny organic to the people. Apatow isn’t quite in his league yet. But Funny People – sensitive, shaggy, a little bit draggy – is as much about the maturation of Ira as a performer and George as a man as it is about Apatow’s maturation as an artist. 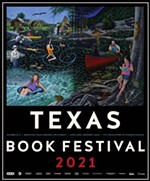