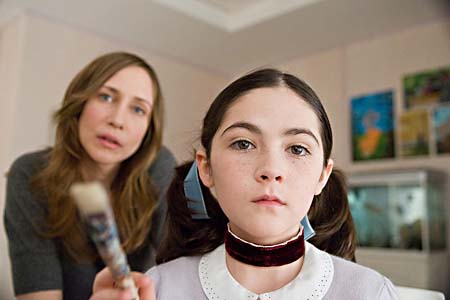 Perhaps the most unsettling aspect of this relatively effective entry into the hoary little-girls-from-Gehenna genre is the fact that it was co-produced (along with 15 others) by Leonardo DiCaprio and Joel Silver, a match to rival any in Hollyweird lore. (Here's hoping it portends further interesting executorial endeavors for DiCaprio. I'm thinking a Jan Svankmajer/Gregory Dark-helmed VeggieTales outing might well be in order for the vegetable-eating actor/producer/greenie.) Director Collet-Serra has 2005's efficiently disturbing House of Wax do-over to his credit, and here he manages to inject some seriously warped life (and, natch, death) into the almost completely strip-mined genre of evil children who enter otherwise normally dysfunctional nuclear families and proceed to go absolutely bat-shit. When it comes to vile little preteen pyschopaths, it's all in the eyes, as every film from Wolf Rilla's vintage Village of the Damned to Mervyn LeRoy's The Bad Seed can attest, and 12-year-old American actress Fuhrman has the look that kills and kills again, in spades. Esther (Fuhrman), a patently diabolical 9-year-old Russian orphan is adopted by Kate (Farmiga) and John (Sarsgaard) Coleman following the stillborn death of their third child. The grief has sent recovering alcoholic Kate into treacherous mental waters and John spinning back toward his prior adulterous ways. Their two biological children, cowed adolescent Danny (Bennett) and preteen Max (Engineer, who manages to trump Fuhrman's calculated, disturbing performance), are little more than grim pawns in Esther's slow-building usurpation of this already heavily benighted family. Still, in films such as this, it's rarely, if ever, a wise choice to adopt pale, raven-haired Euro-gothlings with decidedly outré artistic inclinations and unexplained scars; you'd be far better off going the in vitro route with an assist from Udo Kier or, failing that, Giovanni Lombardo Radice. Orphan is expertly and expressively lensed by Jeff Cutter, whose longtime association with One Hour Photo's Mark Romanek is much in evidence in the film's striking camerawork, which mines both bruised-looking visual veins similar to those perfected by Freddie Francis in his Hammer horror days and Romanek's own off-kilter, semisurreal stylistics. Bottom line: This Orphan is an atmospheric and occasionally vicious little git and an above-average entry into the "cuddly hellspawn" genre, overlong at two-plus hours but nowhere near as excruciatingly overdone as others of its ilk (Devil Times Five, I'm talking to you).