The adolescent ticket-taker at Monday's matinee told me I have really pretty hair, and I very nearly fell over – how often, really, are people kind without provocation or generous without hope of reward? I was a little bit shamed, actually, and I decided I was going to be a better person, starting right then and there – starting, in fact, with G-Force, a movie I had only an hour before referred to, sight unseen, as "that goddamn gerbil spy movie." My first mistake: G-Force stars guinea pigs, not gerbils. My second mistake: I should have pledged to start this new open-hearts policy in another 89 minutes, which is how long it takes to weather this technically competent if utterly artless family film from überproducer Jerry Bruckheimer. Among the film's many bewilderments: the sight of genuine comic talents such as Galifiniakis and Arnett (in the flesh), wrangling with material so beneath them as to be subterranean, while Favreau and Rockwell, doing voice work as rodents, mouth lines that appear to have been cobbled Mad Libslike from a master list of creaky catchphrases ("Don't try this at home," "Mess with the bull, you get the horns") and movie quotes from age-inappropriate sources such as Die Hard and Scarface. In its gadget-lust and obvious Transformers envy, G-Force is as loud and stupid as anything former Bruckheimer collaborator Michael Bay ever cooked up, and its characters’ sketchings are similarly crude. (One wonders if Cruz knew the introduction of her character, Agent Juarez, would be trilled to a Spanish guitar.) But the real head-stumper here is how so much time, effort, and money could be spent in the service of something so colossally dumb. And then I remember my pledge about kindness and generosity extending even so far as to goddamn gerbil spies – sorry, guinea pigs – and I scour my brain for some bright spot. Come to think of it, those guinea pigs have really pretty hair, too. The film's special effects work, combined with 3-D technology, renders their every hair supple and defined. But the eyes – oh, the eyes are dead, as vacant as those of a plastic doll. It doesn’t end with the eyes: All of G-Force is just as vacant and pointless. 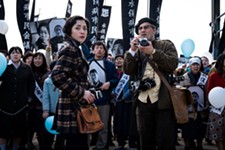