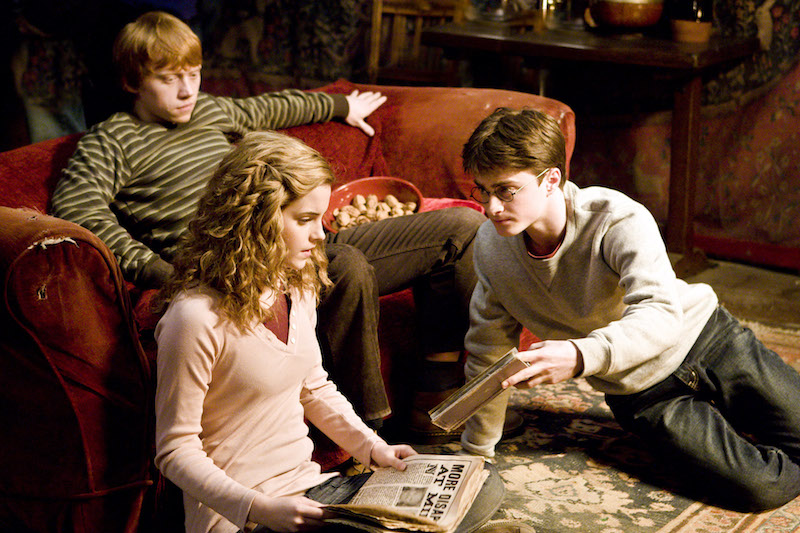 Before, the films were just garnish, really, to a marvelous text that continued to mature simpaticolike with its hero Harry Potter (Radcliffe), the orphan wizard predestined to battle dark Lord Voldemort (Ralph Fiennes). But now, with author J.K. Rowling having shut the proverbial book (all seven of 'em) on the Potterverse, the films are all we have to go on, which is why we want so very much for the filmmakers to get it right, Rowling's potent mix of the cozy and the calamitous. Yates returns as director after his superlative Harry Potter and the Order of the Phoenix (besting, in my book, even Alfonso Cuarón’s artful, toil-and-trouble Harry Potter and the Prisoner of Azkaban). From its terrifying first tangle with soul-sucking Dementors to the tragic last-act death of Harry’s godfather, The Order of the Phoenix was tonally true to the deepening sinisterness of Rowling’s books: This is, after all, a world at war. The opening frames of The Half-Blood Prince further the series’ urgency and panic: Voldemort’s agents, the Death Eaters, have launched a full-scale assault on both wizards and Muggles (regular folk, that is), sacking shops and laying waste to the Millennium Bridge in an opening volley that plays like a vise grip on the lungs. But why then, when the students return for a new term at their beloved Hogwarts School of Witchcraft and Wizardry, does it all feel like business as usual? Gone is any escalation, the ever-thickening, ever-sickening sense of dread; The Half-Blood Prince would rather flush pink with its lovesick teens than forward-thrust toward the mammoth battle of good vs. evil. Don’t get me wrong: It’s a giggling good time, watching adolescent boys try to work out their feelings, and the film’s leading trio – Radcliffe as tormented Harry; Grint as his lunkheaded best friend, Ron Weasely; and Watson as their tart Gal Friday, Hermione Granger – has grown from stuttering child actors – mere babes! – into confident, even subtle performers with an easy rapport. But with all the hemming and hawing over love stuff, the action and the epicness have gone missing. The films have always had a revolving door for cast and crew, which has led to some delightful discoveries: This year's vintage is Broadbent as an overpuffed potions instructor, his bushy, cocked eyebrows doing most of the work. But that revolving door also means the loss of earlier talents; The Order of the Phoenix had two that now, in retrospect, proved integral to that film’s success, cinematographer Slawomir Idziak (who previously shot for Kieslowski, ’nuff said) and scripter Michael Goldenberg. Despite the occasionally arresting visual, new director of photography Bruno Delbonnel’s work tips toward murky and undistinguished (which may have something to do with a reported rejiggering of a radical color palette the studio had gripes with). And after a one-film breather, screenwriter Steve Kloves has tapped out something both sprawling and yet weirdly slight. Fidelity to the source – all 757 pages of it – was of course an impossibility, and we get that certain subplots would have to go (fare thee well, Fleur and Bill, Tonks and Lupin). But Kloves inexplicably guts the book’s last 100 pages – you know, the part you wept your way through – torching major plot points and character motivations, a thrilling battle, a state funeral, and a heart-in-your-throat declaration of self-sacrifice. It’s always a pleasure to be in the company of Potter, and when looking back at the just-competent first outings, well, baby, you’ve come a long way. But still: Where’s the magic, huh?