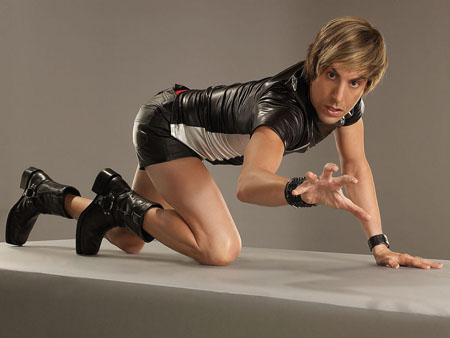 Cohen's third feature – following 2002's mostly overlooked Ali G Indahouse and 2006's hugely successful Borat – is a lot like its rampantly gay, Viennese protagonist: The film may have only the best of intentions, but it tries way too hard and ends up being shallow, superficial, and only sporadically funny. It's certainly a far cry from the cultural beat-down of Borat, which in hindsight proves to be a surprisingly good-natured and even sweet mockumentary/provocation when compared to the downright mean-spiritedness of this new(-ish) Cohen incarnation. It says something about the somewhat situationist, vaguely absurdist philosophy of the comic, as well as that of helmer Charles, that Brüno was rumored to have undergone some adjustments in hopes of placating defensive gay groups that felt the initial cut of the film might allow the movie's stridently nonjudgmental (toward gays but virtually no one else) tack to get lost in a theatre full of Yankee Doodle white trashers. They have a point, though. Cohen's Brüno is less specific and less interesting – and therefore less funny – than the dim Kazakhstani reporter of his previous film, and Brüno feels far less like a skewering of puritanical American homophobia than it does an excuse to string together a series of jury-rigged sketches and encounters with the likes of Ron Paul (who exits in a queer-phobic huff after Brüno comes on to him in a hotel room) that probably wouldn't have passed muster on Da Ali G Show. While it's certainly possible that a theatre full of Southern-fried rednecks might not get the joke, or care to, the converse is so ill-tempered here that you almost feel bad for all the cultural flotsam and jetsam on parade here. That includes the group of Deliverance-esque bunny hunters who accept Brüno into their midst (why?) and the Dallas-area talk-show crowd that recoils at the sight of Brüno's newest fashion accessory: an African baby he "swapped" for an iPod on his way to the U.S. Other problems are purely aesthetic – Cohen lets his Austrian accent slip several times into his native Cambridge – and the film suffers mightily from a slapdash style that simply doesn't feel intentional. Whether this is the result of the alleged reshoots or just part of the Ali G ethic of keepin' it real is anyone's guess, but Brüno never comes close to the inspired comic/cultural lunacy of Borat, or even the dunderhead fearlessness of Ali G. 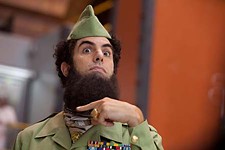 Religulous
Bill Maher walks with the angels in this documentary, which he uses as his pulpit to proselytize the gospel of doubt.