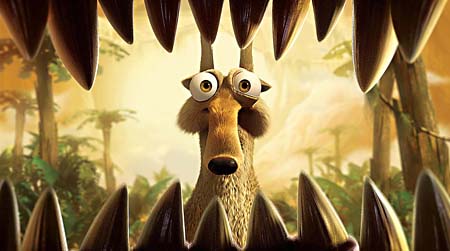 Ice Age: Dawn of the Dinosaurs

3-D has finally found a home to call its own. Animated fare such as this third outing in the prehistoric, non-nuclear-family franchise and Disney/Pixar's recent masterpiece Up both use the stereoscopic fad to good effect but go about implementing it in different ways. Whereas Up was careful never to let the glasses do too much more than enhance action that the mind's eye would already be focusing on (thanks to a pitch-perfect script and some very nuanced storytelling), Ice Age: Dawn of the Dinosaurs aims in a more spectacular direction: offering vertiginously dizzying flights with pterodactyls and toothy battles with the saurians of the title. Granted, this particular Ice Age seems to have pretty much thrown in the towel when it comes to Darwinian prehistorical accuracy, which, given the first two films’ sly subtexualizing on global warming and the like, feels a bit like WALL-E suddenly discovering a community of perfectly healthy human beings living beneath the late, great planet Earth. Animation is nothing if not predictably unpredictable. Returning from the series’ last installment, Ice Age: The Meltdown, are young woolly mammoths in love Manny (Romano) and Ellie (Latifah) and their extended, multispecies herd: insecure sloth Sid (Leguizamo), saber-toothed tiger Diego (Leary), and possums Eddie (Peck) and Crash (Scott). Ellie, as it turns out, is expecting a bawling bundle of tusks and fur any day, which means less time for a nerve-racked Manny to come to the emotional rescue of Sid, who promptly decides he wants offspring (slothspring?) of his own. Toward that end, he gathers a trio of oversized eggs from an underground nesting spot, only to be taken below the ice by their understandably annoyed mother – a T. rex, natch – thus necessitating a rescue party headed up by Manny and newcomer Buck, a Melville-spouting mad weasel with an Ahab complex and the voice of Pegg. (Also, frankly, the most inspired piece of sustained comedy in the film.) Ice Age: Dawn of the Dinosaurs doesn't have a lot more to say than it did last time about the necessity of accepting the nontraditional family in extraordinary times, but what it does have going for it are its well-delineated characters – the acorn-loving, saber-toothed squirrel Scrat (Wedge) returns for some more Looney Tunes-y nuttiness – and a relatively sharp sense of the absurdities of the close-knit clan. That, and a love for dinosaurs, goes a long way.

Ferdinand
A beloved children's book gets a mediocre screen adaptation