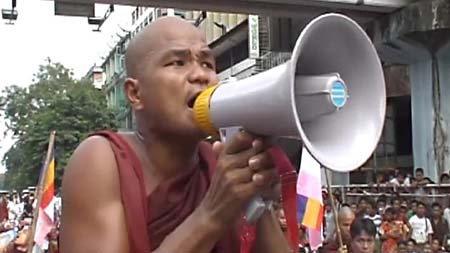 From a purely technical standpoint, Burma VJ is a shoddy piece of work indeed. The images are often blurry, the editing jagged (or nonexistent), the sound design either muffled or shrill or, again, not there at all. But from a journalistic perspective – and what my heart and mind offer, pulse racing, eyes tearing – Burma VJ is a masterpiece. You simply cannot tear your eyes from the events unfolding slowly, bravely, tragically on the screen. Those events spring from the political uprising that occurred in the country of Myanmar (formerly Burma) in the late summer of 2007. The military junta that has ruled the "closed country" with an iron fist made a deadly mistake when, for reasons unexplained, they removed subsidies that caused the cost of fuel to double overnight. Buses, motorbikes, anything that required gasoline was suddenly unavailable to the already poverty-stricken populace. The military had previously crushed a similar uprising in 1988 – slaughtering 3,000 Burmese in the process – but this time, in this devoutly Buddhist land, the protests were led by thousands of saffron-robed, unshod, and shorn monks. As they marched through the streets of Rangoon, a slow but steady stream of ordinary people joined them, until the remarkably calm and unbelievably stoic throngs were literally in the millions, effectively bringing the entire country to a standstill. That's the story. But what's so emotionally riveting here is how the story – the reporting of the protests and the relaying of that precious information to the outside world – is captured. Josuha, a young man with only a Sony digital camcorder, and a handful of like-minded citizen journalists (they called themselves the Democratic Voice of Burma, or DVB), secretly and in constant mortal peril, grabbed shots of the ever-expanding situation whenever and however they could. Their footage was then, via a trusted, clandestine courier, sent to Oslo, where the raw tapes were edited, uplinked to a satellite, and then broadcast back into Burma – and all over CNN, the BBC, and the entire world. Courageous doesn't even come close to describing these tenacious citizen journos. They were the only link to the outside, and your heart aches to see them on the run, shaky footage of their bare feet slapping the pavement as they flee from advancing, heavily armed government troops. Utterly gripping, Burma VJ will rock you to the core. It's an airtight argument for the absolute necessity of a free press, and it should be required viewing for anyone thinking of becoming any kind of journalist, be they blogger, indie-media digicammer, or Facebook feed-streamer. It's the truth, unshackled and captured against all odds, and it's one of the most powerful documentary films I have ever seen, period.