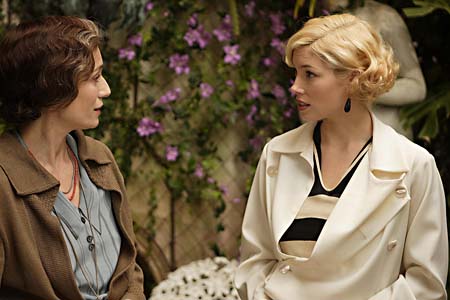 It may tell you everything you need to know about Easy Virtue to note that Hollywood hottie Jessica Biel receives top billing over veteran Brit thesps Kristin Scott Thomas and Colin Firth. The film is an adaptation of an early Noël Coward play in which a brash young American gives Victorian propriety a run for its (dwindling) money. Biel is not completely miscast in this role of the Other in the drawing-room midst, but she exudes a thoroughly contemporary air that never jibes with the Twenties tenor of the English manor-born in the decade after the Great War. (When her character Larita finally consents to join the family for a fox hunt, it should come as little surprise that, in her riding garb, Larita resembles nothing so much as a peroxided Madonna dressed up in her recent vogue as an English countrywoman.) Director Elliott (The Adventures of Priscilla, Queen of the Desert), who also co-scripted this Coward adaptation with Sheridan Jobbins, never gets a solid grip on the tone of his movie, which keeps its comedy wan and its drama outsized. (Examples: a missing Chihuahua joke drags on interminably; a character uttering the clunky line, “Apparently, I am of the romantic Lost Generation.”) Perhaps the need to remind us of the film’s time and place is the reason Easy Virtue is carpeted with a hit parade of Cole Porter tunes (although a ringer such as the soundtrack’s modern updating of “Car Wash” hits a peculiar and decidedly un-Jazz-Age note). Biel plays a race-car driver from Detroit, who, upon winning the Gran Prix in Monte Carlo, locks eyes with one of the celebrants, John Whittaker (Barnes), and falls instantly in love. In the next scene, John is shown bringing his new wife home to meet his family (with Larita at the wheel of the car). Thomas is cast as Larita’s imperious mother-in-law, who has kept the estate’s home fires burning until her beloved prodigal son returns. The younger and elder Mrs. Whittakers clash in every regard, although that famous British gentility keeps the hostilities on a slow simmer. Meanwhile, Larita begins to resent the ease with which her new husband slips into an unperturbable comfort zone while back in the metaphorical womb. Secrets unfurl, and things gradually build to a crescendo in which a provocative tango becomes the film’s climactic moment. But Easy Virtue dances off into the sunset long before this official finale. 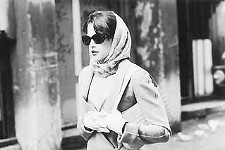 Eye of the Beholder
It took me some time after viewing a midmorning press screening of Elliott's (The Adventures of Priscilla, Queen of the Desert) new film to decide ...