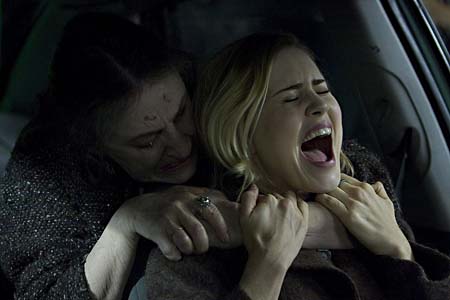 Drag Me to Hell

Drag Me to Hell opens with a crafty little tip-off of what's to come: the Universal logo, circa 1980. It's a nod to the fanboys who have waited patiently for Raimi to return to the "splatstick" horror genre he more or less invented with 1981's Evil Dead and its two sequels – the giddy, gooey classic Evil Dead II and the outright goofy (but terrific) Army of Darkness. Drag Me to Hell never quite hits the psychotronic heights of Evil Dead II – Raimi's working with a PG-13 rating this time out – but, in the interim, the director has honed his skills to a razor's edge in the creation of nerve-racking suspense and jarring shocks. This film is, quite simply, one hell of a ride. It moves with the herky-jerky gait of a spook-house trolley car, rocketing along for whole sequences and then punctuating them with shock cuts and tinnitus-inducing Foley cues that'll have audiences wishing they had borrowed a pair of grandma's Depends before entering the theatre. Raimi co-wrote the script with his brother Ivan in the downtime between Spider-Man films, and the story is as basic a terror tale as they come. Lohman's good-girl loan officer Christine goes against her better judgment and denies an ancient gypsy crone (Raver, filling in nicely for the late Maria Ouspenskaya) an extension on her mortgage. This unintended faux pas leads to a curse and three days of cloven-hoofed horror as the gypsy-summoned lamia demon stalks Christine in preparation for her final takedown into the titular abyss. To summarize more would spoil the fun, and Drag Me to Hell is nada if not a big, crimson bucketful of fun. Raimi pairs his love of Three Stooges-style physical comedy with moments of pure gross-out schtick (Dig that anvil scene! Groovy!) and ends up with one of the purest and flat-out satisfying horror films in decades. There's something wonderfully retro about Raimi's atmospheric creep show, and the film is studded with unobtrusive homages to shockmeisters past (Jacques Tourneur's The Leopard Man and John Hough's The Legend of Hell House are duly noted). But the real reason to celebrate Drag Me to Hell is the simple fact that an obviously enthusiastic Sam Raimi is back behind the camera, Greg Nicotero and the KNB EFX Group are manning the latex-and-caro-syrup gore effects, and summer Saturday afternoons were made for matinees exactly like this one. Drag Me to Hell, which premiered at South by Southwest, is nothing short of horror-hound heaven. 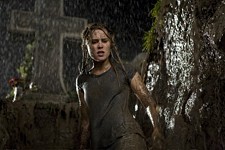 Sam Raimi Is Going to Hell...
Raimi premieres Drag Me To Hell as SXSW