Johnson’s films require an imaginative leap, a willingness to overlook the wirework, so to speak, and just believe. His nervy debut, Brick, was a high school suburban noir: Dashiell Hammett in the mouths of babes and a house of cards fixed to tumble at the first strong wind (surprise: it never did). His follow-up, a con-man caper with the spiritual prints of Paper Moon, Butch Cassidy, and Boris and Natasha, isn’t as strenuously cerebral as Brick – still, gold stars for anybody who catches the filmmaker’s references to Joyce and Homer – nor does it, in the end, altogether hang together. Yet I can’t recall another recent film that made me want to stay plunked in my seat through the closing credits, the quick theatre clean, and all the crap commercials in order to watch the thing straight through again. The opening sequence – narrated by a rhyming Ricky Jay – introduces the titular brothers as orphaned preteens on the occasion of their first con. Stephen is older, the mastermind, and Bloom (no first name, just Bloom), the younger, moonier one. The sequence establishes what will be the film’s dominant themes – fraternal love and loathing, the con as a means of storytelling, and the power that comes with controlling the con, with controlling the story. Flash-forward 20 years, and the relationship dynamic has stayed the same: Stephen (Ruffalo) doodles fantastical scams that involve blood squibs and embedded symbolism, and Bloom (Brody, looking for all the world like a lovesick mortician) joylessly plays his part in the con. Where others see magic in the spectacle, Bloom, well, can only see the wirework. He wants out, but it wouldn’t be a con movie without that one last job, so the brothers, along with their Japanese arms expert, the silent but snarky Bang Bang (Babel’s Kikuchi), settle on a final mark: an eccentric shut-in heiress named Penelope (Weisz). In the grand tradition of con movies, it isn’t exactly clear who’s scamming who second to second, but what’s never called into doubt is the bond between the brothers, gentleman thieves in all manners of hat, from Panama to porkpie and bowler. There’s also a slow burn building between Bloom and Penelope, and it’s sweet stuff: Brody was built for this kind of hang-dog romancing, and Weisz’s Penelope is like Audrey Hepburn as raised by wolves, a wild child pop-eyed at her first tongue kiss. The Brothers Bloom never achieves the satisfaction of a real crackerjack con movie, that visceral thrill that comes when all the snaggletoothed parts click into place, and too often Johnson’s instincts tip toward excess. But if you’ve ever known that peculiar pain of certainty that you were born in the wrong era, then the mood he’s conveyed here – via costume and art design, a jazzy retro score (by cousin Nathan Johnson), and capital-letter sentiments such as loyalty, fraternity, and an old-fashioned swoon (watch Brody’s thumb on Weisz’s wrist) – is a balm. Johnson has made an imperfect film, but I perfectly adore his sensibility. 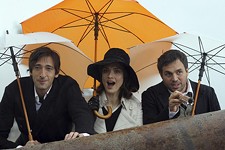 The Long Con
After kicking around for months, 'The Brothers Bloom' finally makes its mark