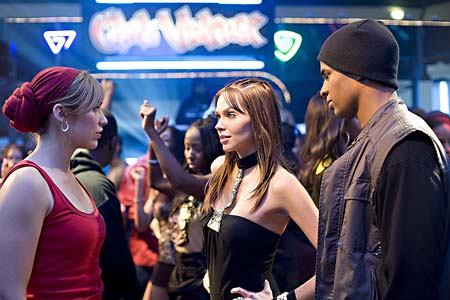 While Dance Flick’s abiding comedic principle has a forever-young quality to it (to sum up: You can’t go wrong with fat people and spontaneous expulsions of the bodily kind), the closing credits will make you feel your age: That’s Damon Wayans junior as the eager and affable leading man, and director Damien is second-generation Wayans, too. Still, their better-known uncles – including Keenen Ivory, Shawn, and Marlon – pop up in writing, acting, and producing capacities, and Dance Flick doesn’t stray from the playbook of previous Wayans brothers' genre parodies, including Scary Movie and Don't Be a Menace to South Central While Drinking Your Juice in the Hood. This one reproduces almost in toto the plot from 2001’s Save the Last Dance, a biracial love story that used oil-and-vinegar dance styles (her formal ballet, his down-and-dirty hip-hop) to dramatize the young lovers’ culture clash. It was a pleasant enough film, if not exactly one for the ages, which makes its immortalization in Dance Flick a curious choice. But for sound logic and artistic integrity, you’re barking up the wrong tree: Dance Flick is what it is, and for what it is, it’s a decent enough spot of silliness. Anyone with an affection for dance-off films such as You Got Served, Stomp the Yard, and Step Up will get a kick out of playing spot-the-reference, and Dance Flick amiably trots out the standards from both dance-crew films (the deadly “signature move”) and high school pictures (ah, ye olde caf scene). As for Sedaris’ turn as an anatomically challenged dance instructor named Ms. Cameltoé: There’s no question if the character, or her signature queff, is in questionable taste, but what I’m still trying to tease out is if the groan or guffaw came first, and which will leave a lasting impression. Probably neither – I imagine Dance Flick exits the system in 24 hours or less. 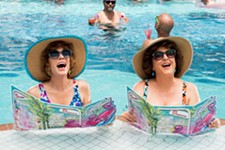