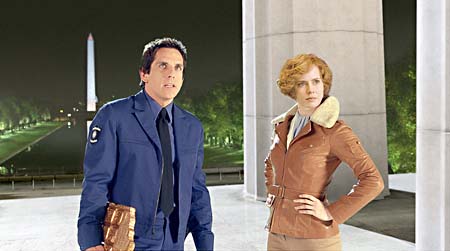 Night at the Museum: Battle of the Smithsonian

Is it an act of sly subversion that one of Jeff Koons’ ironic stainless steel, candy-colored balloon animals comes to life and frolics, albeit briefly, through the background of this 20th Century Fox-produced slab of commercial bloat? Probably not, but it is the smartest gag in a shamelessly dumb movie. Koons' flair for intellectually shallow, aesthetically outrageous neo-pop art fits perfectly well into the world of prepackaged, Rupert Murdoch-owned media mediocrity. Certainly it's nowhere near as transgressive or entertaining as Stiller's shaggy, half-over-the-ear haircut (which, frankly, deserves its own spin-off franchise). Director Levy and returning screenwriters Robert Ben Garant and Thomas Lennon have moved the location from New York's American Museum of Natural History to D.C.'s Smithsonian, but virtually every other aspect of this sequel was touched on (manhandled, actually) in the original film. Stiller is again cast as Larry Daley, a former night watchman over ambulatory museum pieces who has since left his enchanted charges for a successful career as an infomercial pitchman. When a necessary plot contrivance calls him back to his former post, he discovers his old friends – among them Teddy Roosevelt (Williams), cowboy Jed (Wilson), and Roman ruler Octavius (Coogan) – threatened by an imminent change of venue and an accompanying loss of nightlife. Enter Azaria's sinister Egyptian overlord, Kahmunrah, who schemes to rule the world via the first film's life-bestowing tablet. Allying himself with Ivan the Terrible (Guest), Napoleon Bonaparte (Chabat), and a black-and-white Al Capone (Bernthal), Kahmunrah finds Daley and pals, chief among them a sassy Amelia Earhart (Adams), considerably more of a challenge to conquer than pyramid-building. The film has what feels like hundreds of hours of mindless noise and comic CGI chaos but only a handful of moments worth of real laughter. Much of that comes from Azaria, who proves yet again that he's a master of fully immersive comic genius. He plays Kahmunrah with a pitch-perfect Boris Karloff lisp and an attitude of ponderous, self-involved power(-lessness). Azaria is the only real reason for anyone over the age of 12 to shell out the better part of a sawbuck to endure this Battle, although kids with nonexistent attention spans will probably have a ball watching the zany shenanigans of Stiller's creepy haircut and its equally cornpone pals.