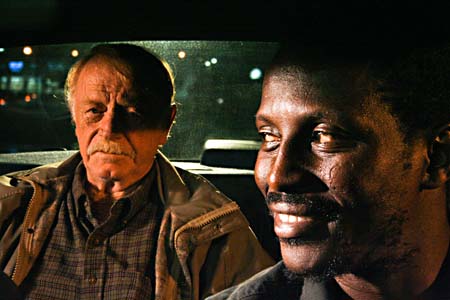 Here's the thing: I'm excited about the new Star Trek, too. But Star Trek isn't going anywhere, and, without a doubt, Bahrani's small marvel of a film will be muscled out of theatres before its time is due. An American portraitist working in the same scope (but with more hope) as Wendy and Lucy’s Kelly Reichardt, Bahrani has made three films in four years, all of them critically acclaimed if underseen, and in 2008 he won the prestigious Someone to Watch Independent Spirit Award. Goodbye Solo – which continues the vehicular thread of his previous films, Man Push Cart and Chop Shop – tells the North Carolina-set story of the brief bond that forms between a Senegalese cab driver named Solo (Savané) and his frequent passenger, 70-year-old William (West, a former stunt actor and one of Elvis Presley's longtime bodyguards). The opening unbroken two-shot quietly commands attention: Solo at the wheel, cracking jokes over the hum of the cab dispatch, and sullen William in the back, resisting Solo's attempts at camaraderie. William wants to pay Solo $1,000 to drive him in two weeks' time to Blowing Rock off the Blue Ridge Parkway: a one-way trip, or the proverbial long walk off a short pier. Solo initially balks, but it's good money – he has a wife, a stepdaughter, and a baby on the way to think of – so he agrees to the trip. But in that two weeks, Solo goes about inserting himself into William's life, forcing a connection with a man who resists openness and intimacy at every turn. There are simply no wrong beats in this largehearted examination of human curiosity and kindness and the limits of both when it comes to our influence on others. Bahrani and co-writer Bahareh Azimi haven't underscripted the film by any means, but what's most remarkable about Goodbye Solo is what it achieves without words – how it illustrates Solo, normally a cheerful motor-mouth, silently grappling with mental anguish. (Savané, in his feature film debut, is terrific, his stubborn strong-arming cushioned by an infectious smile.) Cinematographer Michael Simmonds knows how to shoot the actors' faces to maximum effect, and he lenses the industrial brick and sunrise/sunset of Bahrani's native Winston-Salem and the foggy, fall-colored Blue Ridge Mountains with equal loveliness – a loveliness that should be seen on the big screen and preferably as soon as possible. 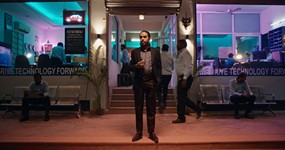