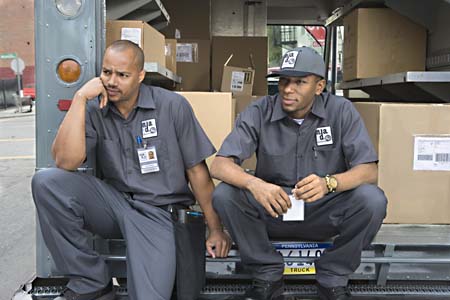 Less an original film than a collection of narrative short ends culled from the likes of True Romance, Snatch, and half a dozen other, better cinematic tales of druggy, ill-gotten gains, Next Day Air is consistently unremarkable from its dullsville title on down. There are flashes of neo-blaxploitation/Nuyorican, pistolero action amid all the convoluted plot details, but this Philadelphia-set culture clash is a veritable melting pot of borderline, pan-American racism: Everyone here who's not white is either doing, selling, or shooting, and there's nobody white in this film. Viva la raza-ism, yo. Longtime music video/hip-hop doc director Boom chose an easy first-out with a script from debuting screenwriter Blair Cobbs. You can easily imagine the pitch as something along the lines of "Things to Do in Philly When You're Black, Brown, or Dead," plus or minus a few stray ricochets from the Guy Ritchie and Quentin Tarantino schools of utterly improbably coincidence (not that Next Day Air features either the the roguish gutter panache of Ritchie or the psychotronic smarts of QT). Long story short: Sinsemilla fiend and package-delivery driver Leo (Scrubs’ Faison) drops off a snootload of blow to the wrong apartment, which is good news for slacker ne'er-do-wells Guch (Harris), Buddy (McCrary), and Brody (Epps), who stupidly assume they can get away with selling it to minor drug kingpin Shavoo (Hardwick). It's bad news for their next-door neighbor Jesus (Reyes), the dope's intended recipient, and his none-too-bright girlfriend, Chita (Deliz), who now have major drug kingpin "El Bodega Diablo" (Rivera) to contend with. Meanwhile, back at NDS (Next Day Air, natch) shipping HQ, Mos Def proves you can slum your way through a shit film and still come out looking like a million bucks and smelling like roses. Seriously: Do I have to write Mr. Def a decent script myself, or what? Mos Def, the smoothest of onscreen operators even when he's not trying, has been crackerjack in everything from Monster's Ball to The Hitchhiker's Guide to the Galaxy – he was probably even good in The Cosby Mysteries, but, sadly, we have yet to screen that enticingly titled TV gem for ourselves – yet he remains one of the most criminally underused actors in all of Hollywood. He's the only thing remotely interesting in this otherwise ham-bone affair, and even his character is a duplicitous schemer who steals from his mother's shipping business and generally acts the (admittedly above-average) fool throughout. With myriad plot threads that go everywhere and nowhere at once, Next Day Air might make a terrific double bill with the equally inane (but considerably more entertaining) Con Air, with the French electonica duo Air chirruping in the background. But, you know, only if you're stoned out of your head. 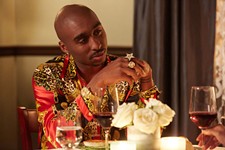