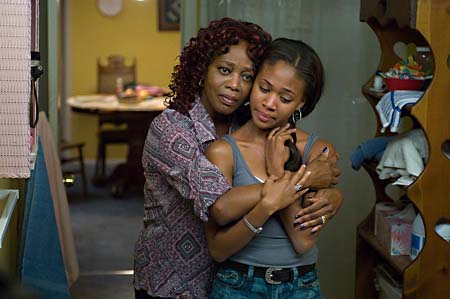 Although they say the truth can set you free, Dee Roberts (Beharie) found that to be a load of bunk when she was arrested by the police in her small Texas town. Based on true events, American Violet tells a story about a miscarriage of Texas justice and one woman’s adamance and courage despite terrifying odds. Although the film is poorly titled and is structured as a conventionally rendered docudrama with a message, it is movingly told and packed with powerful subject matter. Newcomer Beharie makes a strong impression as Dee, a 24-year-old single mother who supports her four daughters through a combination of waitressing and government assistance. She lives in a housing project, where her mother, Alma (Woodard), babysits her girls while she is at work. While Dee is at work one day in November 2000, the local district attorney (O’Keefe) organizes a military-style drug sweep of her housing project and has the police come to the diner where she works to arrest her. Based on the testimony of a single person, Dee is charged with drug dealing and held for bail, even though there is no evidence and she swears she never had any involvement with drugs. Her mother and friends urge Dee to accept the plea deal the D.A. is offering, but she refuses to concede. Enter the American Civil Liberties Union attorney (Nelson, for a change playing an educated Southerner instead of a cracker) and local lawyer (Patton), who take on her case and eventually get the Texas law that led to her false indictment overturned. Along the way, American Violet dramatizes the effects of the accusations on her children and community and makes numerous statements about the number (greater than 90%, according to the film) of incarcerated Americans who accept plea bargains rather than make the effort to fight their charges in court. And once convicted, such things as child custody and government assistance can be lost in addition to the right to vote. American Violet provocatively plays out against the background of the court wranglings that followed in the wake of the contentious 2000 presidential election. With strong performances and a strong message (which, in these parts, hits particularly close to home), American Violet is worth a look. Short of that, at least renew your ACLU dues. 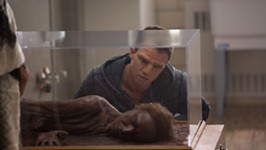