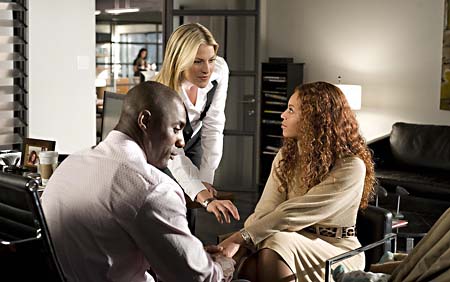 Earvin “Magic” Johnson, the owner of a chain of movie theatres and one of the many producers (along with star Beyoncé and her father) of the thriller Obsessed, must be flashing that big Magic smile after the film’s No. 1 success in its opening weekend at the box office. The popularity of Obsessed lends credence to the theory that you can never underestimate the American moviegoers’ appetite for a juicy catfight. Obsessed unspools like one long tease for the girl-on-girl wrestling we know will eventually come. Until that climactic point (and even during it), Obsessed is a routine mash-up of Fatal Attraction, Disclosure, and The Hand That Rocks the Cradle in which happily married asset manager Derek (Elba) is sexually harassed by beautiful office temp Lisa (Larter). Of course, the dumb lug never tells his wife, Sharon (Knowles), or the company’s human resources department about Lisa’s inappropriate attentions, so by the time he discovers just how bat-shit crazy she really is, Lisa has already invaded his away-from-office life. Extra frisson comes to the tale by way of the interracial angle, as the perfect buppie couple becomes threatened by a pale white vixen. In her burgeoning film career, Knowles has been shrewd about selecting her roles, going from eye-candy decoration in Austin Powers in Goldmember and The Pink Panther remake to singing actress roles in The Fighting Temptations, Dreamgirls, and Cadillac Records. With Obsessed it’s now time for her Sasha Fierce alter ego to make its presence known, not only in her recording career but her onscreen persona as well. It’s Fierce who comes out for that climactic sequence in which all by herself she fends off the crazy temp’s invasion of her home. Fierce/Sharon manages this feat in high heels, to boot, while Lisa is barefoot in a T-shirt and underpants. Obsessed delivers in its limited way, as the audience audibly responds to the characters’ choices and actions, even though we know exactly what to expect. The film may seem a bit undercooked until it gets to the staging of the ultimate battle, but Obsessed is swinging from the chandeliers by the end.