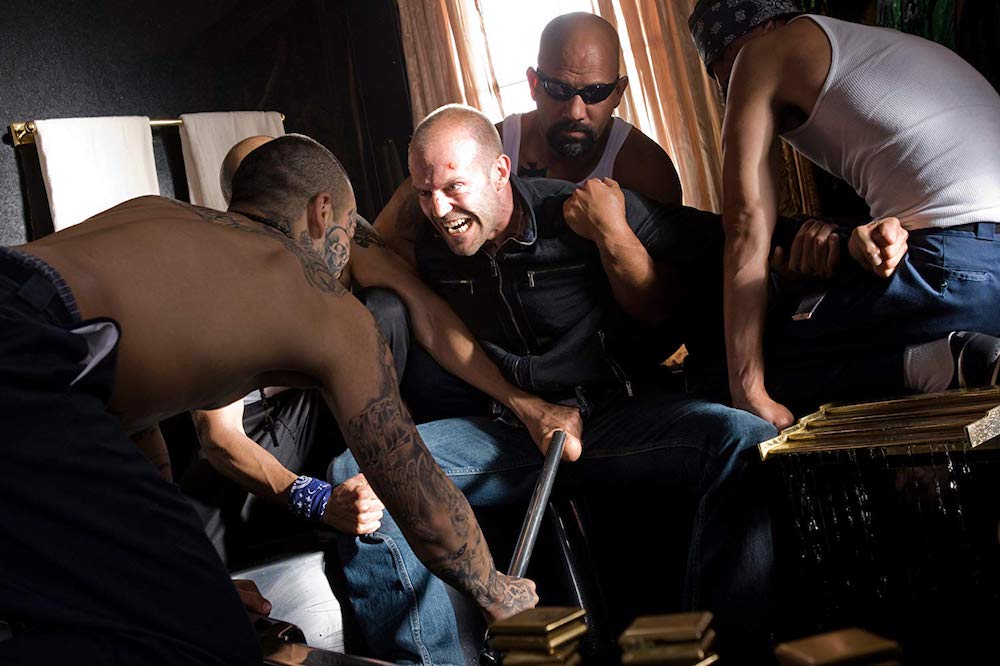 Serendipity is weird stuff. Just the other day, I was sitting around my flat scoping old Toho productions and wondering why the whole kaiju eiga ("giant monster") genre never took hold in Hollywood. Sure, we've had Cloverfield and venerable old Kong, but inexplicably the whole bigger-is-cooler (or at least more surreal) mindset of Toho's Gojira series never quite jelled into anything more entertaining than Allison Hayes’ 50-foot pulchritude tearing up the Vegas Strip amidst our permanently buxom pop-cultural zeitgeist. So you can imagine my delight (or, more accurately, my sincere and total sense of “what the hell?!”) when, in the midst of a knock-down, drag-out bout of fisticuffs between Crank's undead hitman, Chev Chelios (Statham), and an Asian foe (Hsu), the film suddenly, ridiculously, charmingly morphed into an oversized parody of Ishiro Honda's classics King Kong vs. Godzilla and War of the Gargantuas, complete with the slow-motion destruction of a miniature power-station set and – I'm not making this up – little plastic people pointing and screaming (one of whom turned out to be Troma Entertainment's irrepressibly game-for-anything Lloyd Kaufman). I mean, come on, that's borderline genius. Warped genius, but genius nonetheless. Crank: High Voltage is not nearly as much fun (or as coherent) as its culty predecessor, but directors Neveldine and Taylor aren't striving for anything approaching reality this time out: The entire film is really just a series of gags strung together with a mere shadow of a storyline behind them. Hitman Chelios, who fell a mile out of a helicopter, bounced off a car, and then died three inches from the camera operator in Crank, escapes the white light only to find that his overstimulated heart has been harvested by a Triad gang and replaced with a temporary artificial model that requires an electrical jump every five minutes or so. Obviously, he'd like the original model reinstalled, and thus Crank: High Voltage ups the ante, this time with complete and utter disregard for any of the conventional rules of story, character, or filmmaking in general. It's a total mess of a movie, but it's also "a fuck of a lot of fun" (as I heard one co-audience member critique it, post-screening). Ling (Three … Extremes), as a screechy Asian hooker prone to striking mock-serious animé poses, nearly steals the film from the unflappable Statham; Smart gets it bang-on in public yet again; and Yoakam returns as Doc Miles, Chelios' shady doctor-cum-geek chorus. Shot, acted, and edited like a methamphetaminized video game from hell (and I mean that in a good way), Crank: High Voltage is laughably and knowingly preposterous, cheerfully un-PC, and violent in a way that makes the myriad slaphappy deaths of Wile E. Coyote seem downright dull in comparison. It's not so much a movie as it is a collection of ludicrous skits and daffy characterizations (Ramirez's spaghetti Westernized Venus is a hoot and a half). While this film is never as satisfying as its frantic, frenetic predecessor, it makes up for what it lacks in coherence with a surfeit of inspired non sequiturial stupidity. If, like me, you've ever wondered what would happen if Takashi Miike were possessed by the spirit of Chuck Jones, well, now we know.