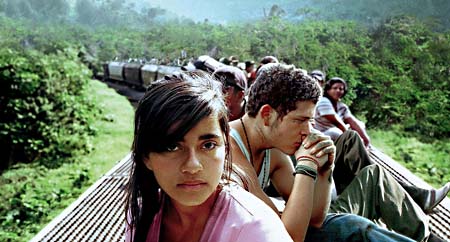 Suffused with gritty realism, poetic imagery, and melodramatic hokiness, Sin Nombre is a jumble of intentions striving to be a unified whole. Winner of dual awards for directing and cinematography at this year’s Sundance Film Festival, this immigrant drama aims to cross over from strictly arthouse audiences to Spanish-speaking patrons, as well. The film begins in two separate locations that establish the backgrounds from which the two central characters emerge. In Honduras, teenage Sayra (Gaitan) decides to emigrate north to New Jersey with her father and uncle. They travel to Southern Mexico where the rest of their perilous, illegal journey toward the U.S. will occur atop train boxcars, huddled together by the dozen and fully exposed to the elements. In Mexico, we are also introduced to Casper (Flores), a teenage member of the vicious Mara Salvatrucha gang, whose elaborately tattooed local leaders dispense orders to kill with no sense of remorse. One scene of the brutal hazing of prepubescent Smiley (Ferrer), who is Casper’s best friend, is enough to show the bloodthirstiness of the group. When the gang hops aboard the train to plunder the impoverished travelers, Casper steps in to protect Sayra when she is about to be raped. This makes him a marked man among the gang members, even pip-squeak Smiley, so he continues north with no objective other than to stay one step ahead of certain death. It’s in this first half of the story that Sin Nombre is most potent. The images of gang life and stray shots of the Mexican countryside and people tossing food to the travelers atop the train are unforgettable. In the second half, a contrived love story between Sayra and Casper develops and tacks unwarranted baggage onto the drama. Writer/director Fukunaga’s images are striking, and his storytelling abilities are strong, but his screenwriting skills rely heavily on sappy formulas that add nothing to our understanding of the border-crossing experience. Despite the unevenness of the ride, however, the memory of Sin Nombre is indelible. (See "Roof-Riding to an Uncertain Fate" for an interview with the director.) 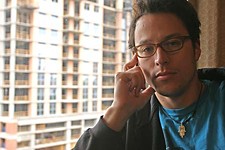 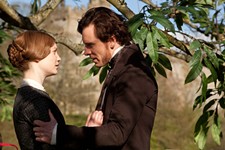 Jane Eyre
The foggy moors are palpable, the passions less so, but this new adaptation of Charlotte Brontë's oft-told story is a handsome addition to the canon.