“If that boy were an apple, he’d be a Delicious,” croons one young female admirer of the 17-again character played by Efron in his first if not adult then at least PG-13 role. That said, if this movie were a grain, it would be classified as pure corn. Age-reversal movies have a fine Hollywood tradition and narrative purpose. Many a midlife crisis has been assuaged by a “magical” revisiting of one’s youth, where important life lessons can be learned and carried back to the present, while comical escapades ensue along the way. So much of the format’s success depends on an actor’s ability to convince us that such an age-defying transformation has, indeed, occurred. Think Tom Hanks in Big or Jamie Lee Curtis in the Freaky Friday remake. Though remaining sweet and tasty, Efron, in his first nonsinging and dancing feature film (if we don’t count the yet-to-be-released Me and Orson Welles by Richard Linklater), proves he has an agreeable and kinetic screen presence, although his ability to convince us he’s truly a 37-year-old encased in a 17-year-old’s body is dramatically dubious. Not that any of this matters much: The movie manages to glide along engagingly and swiftly enough to not make this failing terribly conspicuous. Director Steers (Igby Goes Down) keeps the movie’s foregone progression moving apace and, fortunately, doesn’t dwell on the inexplicable vortex that sucks present-day Mike (Perry) into his former high school-senior self (played by Efron). While the ensemble, as a whole, is able, there’s another problem that arises from the casting of former Friend Perry as the near-middle-age incarnation of Mike. It’s not so much a matter of mannerisms but, rather, the disbelief that the two share a face that’s only separated by 20 years. Topping off the pair’s facial dissimilarity is their diametrically opposite approach to hairstyling: windswept mop-top vs. product-heavy slickness. Superficial, maybe, but that somehow seems in keeping with the movie’s general tone. 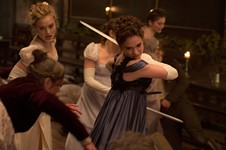 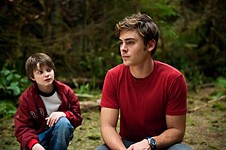