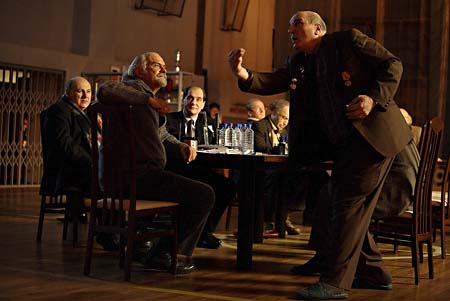 12 is essentially a Russianized version of Sidney Lumet's masterful 1957 courtroom drama, 12 Angry Men, which was itself a remake of a live television production written by screenwriter Reginald Rose and directed by Franklin Schaffner for Studio One (one of the pioneering examples of excellence in television). Rose's story of a sequestered jury debating the fate of an accused man – moving one argument at a time from presumed guilt to presumed innocence – was and is a dynamite example of the gut-level power of socially conscious television melodrama. Lumet's film has lost none of its power in the intervening years; if anything, it's become even more emotionally spring-loaded as political and economic scandals have shaken the pillars of democracy. 12 is every bit as much of a moral powerhouse as its predecessors but with the added bonus of being simultaneously intellectually riveting and, at times, almost indescribably poetic. It's one of the most elliptically lovely films that also doubles as a deconstruction of the human moral compass that I've ever seen. It's that good. It's also deeply, profoundly Russian, in the way that Tolstoy's War and Peace is unequivocably Russian. There's a weary, cynical grace to 11 of these 12 unnamed, initially bored, and impatient men that strikes me as being as Eastern European as it gets. These men have seen the Communists come and go, and they're currently watching their relatively new democracy undergo what appears to be more or less the same death contortions. They're jaded, and they're debating the fate of a young man who is a member of a socially ostracized ethnic minority (Chechens), but one thing they're not is ineloquent. Even the hardest case among them, an anti-Semitic, thuggish cabbie (Garmash), is written to allow the character room for lyrical, elemental humanity. If 12 were a piece of music, it would be Sergei Prokofiev's "Lieutenant Kijé Suite." As a metaphor for the fractious, nonlinear narrative of post-Soviet Russia and its attendant satellite republics – all of them full of blood, treachery, and an inclination toward mistrust – 12 is a masterpiece of hope in the face of seemingly hopeless odds. As an example of contemporary Russian filmmaking, it's on a par with the very best of post-Soviet cinema, especially if you stop to consider that when all's said and done, it's really just a dozen guys in a single room arguing with one another. Director Mikhalkov (Burnt by the Sun), who also pulls off a flawless, unflinching portrayal of one of the 12, clearly believes in society's inherent moral default mode. Even the tiniest of ripples created by the free exchange of ideas has a quality of mercy all its own. By the end of 12, the dawning comprehension of that fact is what renders these 12 men – and the subject of their heated, passionate debate – so fully human and so very alive.