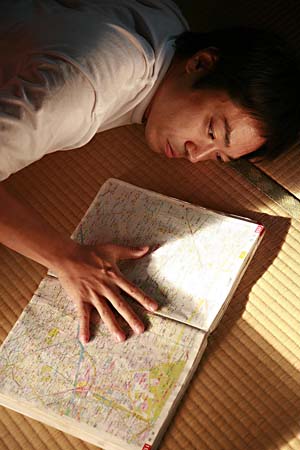 Falling somewhere between the horrors of Three … Extremes and the beauties of Eros, this triptych of short films set in and underscored by the titular megalopolis is a gorgeous, sprawling mess. If I had to compare it to anything – a challenging task – I'd say it was closest to 1968's Spirits of the Dead, which united Federico Fellini, Louis Malle, and Roger Vadim under the guise of creating a film homage to Edgar Allan Poe. That movie resulted in one of Fellini's most overlooked gems, the eerie, experimental “Toby Dammit,” featuring a freaky turn from pop icon Terence Stamp. The equivalent here is Carax's “Merde,” in which a barefooted, green-suited man-thing (played to the drooling, eye-rolling hilt by Lavant) emerges from the sewers of Tokyo and goes on a rampage straight out of Godzilla. Carax, director of spellbinding The Lovers on the Bridge, even goes as far as using Akira Ifukube's memorable Godzilla theme in selected sequences, but he also stretches the metaphors, in pointed visual asides, to include everything from the Rape of Nanking to the hanging of Saddam Hussein. Gondry's segment, “Interior Design,” is more whimsical and in keeping with the elegiac, melancholy pseudo-twee of his underappreciated The Science of Sleep. In it, a sweet twentysomething girl (Fujitani) and her goofy boyfriend (Kase), an aspiring filmmaker with grandiose dreams but zero production funds, move to Tokyo and find the sheer vastness of the city overwhelms their romance. It's a calling card for Gondry's style and frequently hilarious in its poppy creativity, but it ends up feeling like a trifle, although it certainly doesn't lack for heart. “Shaking Tokyo,” by The Host's Bong, is by far the most fascinating of the three. Kagawa is the unnamed protagonist, an obsessive-compulsive agoraphobic who hasn't left his home in five years, who falls for a pizza delivery girl during a drop-off that also, memorably for all concerned, is accompanied by an earthquake. When she leaves, he finds himself obsessing over her absence and is ultimately forced out of his home in search of true love, or something like it. Bong's message is obvious: The isolation of the hikikomori (roughly translated as people whose entire existence never strays from within their own homes or apartments) creates a self-destructive feedback loop of angsty depression, and, um, we all need to get off our computers and out of the house more. It's such an obvious point that we tend to forget about it and dig our graves ever that much deeper. Bong, on the other hand, has made a triumphant film about failure and loneliness. Taken together, there's something for everyone to devour in Tokyo!, both visually and in the narrative sense. Of course, there are also elements that don't quite mesh, which, come to think of it, sounds a lot like Tokyo. So maybe that's the point. Just like its real-life counterpart, Tokyo! is nothing if not a splendid and compelling head trip.