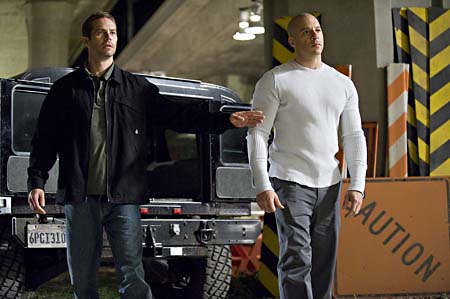 Back in 2001, when we first met renegade street racer Dominic Toretto (Diesel), he was jacking DVD players from big rigs. My, how the times have changed: In this third sequel in the Fast/Furious franchise, Toretto and his team have moved on to an elaborately staged highway heist of … an oil truck. (What's next? Faster, Furiouser, and Stealing Food Stamps?) In fact, it's a marvelously staged and shot opening sequence, the first of a half-dozen or so car races that blessedly put a brake stop to every leaden stretch of dramatic interplay. (There's also a halfhearted chase on foot, but really, in the era of Bourne and Bond, what's the point?) Fast & Furious reunites the original four leads of flagship film The Fast and the Furious: Toretto; his snarly girlfriend, Letty (Rodriguez); his little sister, Mia (Brewster); and onetime friend Brian (Walker), an undercover cop who meant to bring down Toretto's smuggling ring but instead fell in love with Mia – and not a little bit with Toretto, too, with his fast cars, otherworldly pecs, and code of honor. That dynamic – among characters and, perhaps, among the actors portraying them – continues in Fast & Furious, and it's one of the sidelong pleasures of the piece: to watch now-FBI agent Brian trailing Toretto like some eager, gently abused younger brother, and to contrast Walker's pretty, blank aura of bro-dom with Diesel's essential badassness. (The bald pate, the Hulk proportions barely contained by an undershirt, the delivery of every line with the same monotoned husky menace – all this would be risible were it not for the feeling that Diesel's in on the joke.) The story, by Chris Morgan and Gary Scott Thompson, is a bust – a standard-issue revenge tale – and is slickly interpreted by Lin, who also directed the more or less stand-alone The Fast and the Furious: Tokyo Drift. Nothing here hews remotely close to reality: certainly not the slo-mo pans of scantily clad women groping each other at house parties and parking lot raves nor the continued employment of Brian, quite possibly the world's most incompetent cop. No matter. The stripped-down title gets at what we're really here for: the cars. Are they fast? Check. Are they furious? Yep. Does the heart rate respond in Pavlovian fashion to every shot of a speedometer rising, every pedal pushed to the metal? Sure thing. One wishes Fast & Furious had the whole package – as much smarts as speed – but as an uncomplicated, undemanding lark, it'll do. 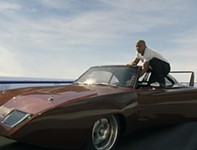