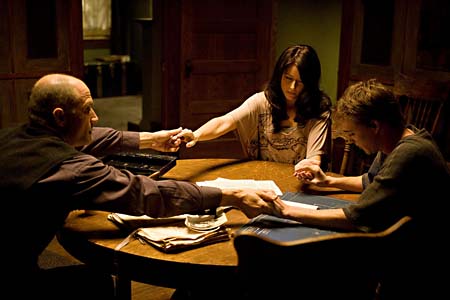 The Haunting in Connecticut

The Haunting in Connecticut opens with a title stating that what follows is "based on a true story," which is all well and good and practically a mandate for this type of haunted-house film. But what galls me – and what will have other genre fans gnashing their teeth down to the sublingual tissue – is that Cornwell's film, stylistically at least, is really "based" on snips and snatches of Lucio Fulci's The Beyond, Mario Bava's Shock, Alejandro Amenábar's The Others, and, of course, The Amityville Horror. The film is based much more on these film forerunners than it is based on any supernatural events alleged to have occurred in the real world. Technically, the film is adapted, loosely, from splatterpunk author Ray Garton's book In a Dark Place: The Story of a True Haunting, but The Haunting in Connecticut has the patchwork feel of a director at odds with himself. Cornwell, who shot the immensely popular stop-motion short “Ward 13,” doesn't get a lot of help from his screenwriters, Adam Simon (Carnosaur, Brain Dead) and Tim Metcalfe (Revenge of the Nerds, Kalifornia). Their stilted dialogue and endless stream of expository yakking seem better suited to one of the post-dubbed Euro-shockers mentioned above. As for the story, true or not, Madsen and Donovan are ill-cast as Sara and Peter Campbell, a fiercely boring upper-middle-class couple who nevertheless make the potentially exciting decision to move their family into a house that formerly served as both a mortuary and nexus of eternal evil. (They don't know that going in, but still.) The move is predicated on situating the family closer to a hospital where son Matt (Gallner) is being treated with chemotherapy and experimental drugs for an unspecified, rapidly metastasizing cancer. Living as he is in the borderland between life and death, Matt is able to see visions of the house's tortured past, though it's not long before the entire Campbell clan is surrounded by haints and horrors. Who you gonna call? Elias Koteas! (Duh.) The veteran character actor (The Thin Red Line, Zodiac) appears here as a priest who, like the increasingly horrified Matt, is also suffering from a dearth of decent dialogue and a surplus of cancer. Koteas' overearnest performance almost makes The Haunting in Connecticut worth a look, but ultimately even the star of Cronenberg's Crash can't salvage what is essentially a substandard rip-off of The Amityville Horror. 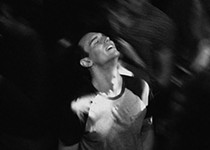 1985
Stunning AIDS drama looks beyond the disease and into grief