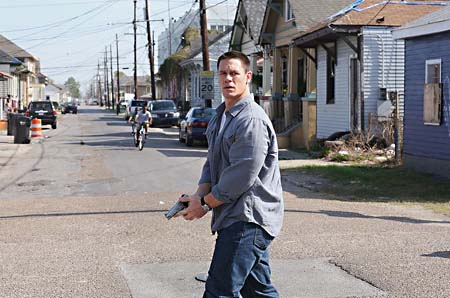 I defy you to hate John Cena. Really. You can try all you want, but I don’t think you’ll make it. You can laugh at his bulging trapezius muscles, which look like they were designed in a lab by scientists from the future; you can mock his misguided elementary school attempts at acting, which make Jean-Claude Van Damme look like Richard Burton; and you can scorn his World Wrestling Entertainment pedigree. But you just can’t hate the man. Even when he’s leveling an already reeling post-Katrina New Orleans like a human bulldozer, he positively oozes homegrown Midwestern decency – like Ron Howard, if Ron Howard could crush a brick with his bare hand. After all, it’s not like Cena’s Detective Danny Fisher wants to destroy New Orleans; he has to. His girlfriend has been kidnapped by a criminal mastermind named Miles Jackson (Gillen), and the only way to get her back is to follow the rules of Jackson’s malevolent game of cat and mouse: a game that involves 12 “rounds” of near-impossible, clock-racing feats of physical skill, deductive reasoning, and moral gymnastics. Fail to make it to a destination on time, for example, and a bomb goes off; dial the wrong phone number, and the brakes go out on a downtown trolley racing toward a crowd of children. That sort of thing. So Fisher drags his beefy, lumbering body all over the city, pursuing speeding cars on foot and lifting boats like they were made of papier mâché, destroying bridges and hotel elevators as he goes, and all the while, Jackson sits back like some omniscient devil reveling in his nihilistic craftiness. He’s like Iago without all the tiresome complexity – an actor’s secret dream part, I’m guessing – and Gillen bites into the role with all the sadistic relish that was always bubbling just below the surface when he was playing Mayor Tommy Carcetti on The Wire. Here, freed from the millstones of intelligent dialogue, good directing, quality storytelling, logic, and feasibility that hung around his neck on HBO’s critically acclaimed series, Gillen is like a kid in a candy store … if the kid in question is a psychopath and the candy store sells mainly semiautomatic rifles and dirty bombs. Where Cena approaches 12 Rounds like a man with a purpose, Gillen knows there is nothing one should take less seriously than a movie directed by Harlin (Cliffhanger, The Long Kiss Goodnight), who long ago realized that as long as you keep the action moving at a blistering pace, your story doesn’t need to make any sense, your star doesn’t have to resemble anything human, and your movie doesn’t have to be any good.