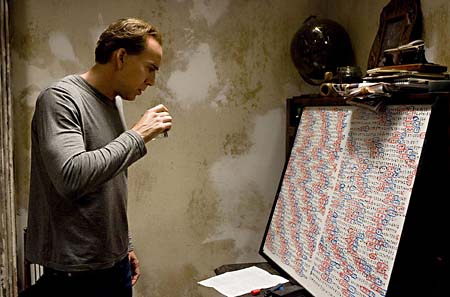 The precipitous decline of Nicolas Cage from moody arthouse upstart to muscle-bound action hero to popcorn-selling, check-cashing hack has been well-documented, so I won’t go into it here. I’ll just say that it can’t be any good for an actor’s reputation when he’s out-emoted by a quartet of faceless CGI space aliens. In Knowing, Cage is nearly somnambulant as John Koestler, an astrophysicist, widower, and father of one who divides his time between raising his son, Caleb (Canterbury); contemplating the randomness of the universe; and drinking heavily. When Caleb brings home a mysterious piece of paper covered in seemingly arbitrary numbers that was pulled from a 50-year-old time capsule, Koestler uses his skills as a math wiz to determine that those numbers aren’t random at all but the exact dates, locations, and death counts of every major global disaster that has occurred since that paper first went into the ground. Koestler’s friends, of course, think he’s a drunken paranoid, clutching at straws as a way to make sense of the senseless death of his wife. But it becomes harder to argue with him when planes and subway trains start crashing on cue and deadly energy bursts start working their way from the sun toward the Earth’s ozone layer. In true mid- to late-period-Cage style, Knowing is a film in which little things like acting and writing and intelligibility take a back seat to special effects. But, my, oh my, what special effects Knowing has. Proyas (I, Robot) may not care much for the subtleties of social behavior, but the man pulls no punches when it comes to human carnage. I’ve never seen so many people on fire before or been forced to contemplate at such length the death throes of woodland creatures. And the film’s coup de grace – an apocalyptic wave of fire and brimstone – is so beautiful and terrifying, it will make the filmgoers both thank God for their quiet little lives and forget they ever saw Independence Day. Knowing is a nonsensical, pop-philosophical stew of biblical prophesy, meteorological aberrations, spooky kids, and aliens disguised as German techno artists, but damned if it isn’t an anxiety-fueled kick in the teeth that feels just right in shaky 2009. It’s just engaging enough to make you accept the possibility that two kids from the Boston suburbs may just be mankind’s only hope for the future and just exciting enough to make you forget that you’re watching a Nicolas Cage movie. 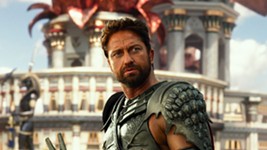 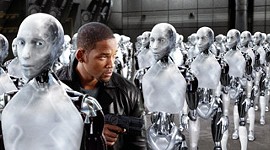 I, Robot
This summer, Will Smith saves the world from … robots.