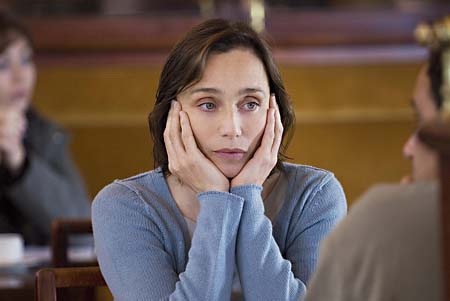 I've Loved You So Long

In the opening scene of I’ve Loved You So Long, the remarkable directorial debut of French novelist Claudel, mother of two Lea (Zylberstein) arrives at an airport to retrieve her older sister, Juliette (Thomas), and the tension between them when they greet each other almost has a life of its own. Juliette, we learn, has just been released from prison after 15 years, and it appears all that time inside has made her intolerant to human contact; she doesn’t embrace her sister so much as summon the strength to brush against her for appearance's sake (all the while barely looking at her from under those heavy, disdainful eyelids). Back at Lea’s apartment, things aren’t much better. Juliette keeps an icy distance from Lea’s two children, while Lea’s husband views their new guest with suspicion bordering on hostility. Thomas, in one of the best performances of 2008, is at her bravest in this early going, diving into a role that will initially inspire little sympathy from audiences. How could it? When Juliette yells at her 6-year-old niece – who couldn’t be cuter if she were made out of gumdrops – we feel attacked, as if that were our daughter being chastised and not some character in a movie. But that outburst turns out to be an anomaly, a one-time explosion from a woman whose default state is deep, and deeply silent, misery – which is just what you’d expect from a woman (especially a French woman) who once committed a crime so heinous her parents felt justified in disowning her. But let’s be honest: Any actress can do melancholy; it takes a special talent to recognize that there’s a certain luxuriousness, a certain joy, to be found in longtime self-hatred, so much so that when it’s interrupted by an outsider’s contempt (whether that of a brother-in-law or a potential employer), the one doing the luxuriating can’t help but respond with contempt of her own. It’s as if Juliette, like some master painter pitying an arrogant novice, has been so well-schooled in the art of shame that the shame others try to pile on her comes off as so much self-righteous amateurism. And Lea, with her good intentions and childish insecurities, is the perfect target for Juliette’s disdain. Their relationship grows and deepens over the course of the movie as we learn the reasons behind Juliette’s imprisonment and Lea’s distance, but even as Juliette inches closer to something resembling redemption, Thomas never gives in to the temptation to simplify or let audiences, or herself, off the hook. She knows that just as there’s something gratifying in suffering, reaching for happiness comes with pain all its own. For Juliette, getting released from jail means little more than a change of address; the real prison is in her head … and will never let her go.