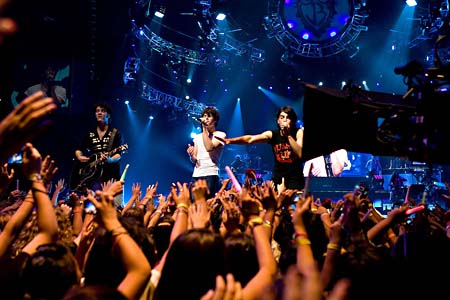 According to my research, the Jonas Brothers are a rock band from the Disney stable of teenage stars. From what I’ve read, they’ve sold millions of albums and appeared on dozens of TV shows. Last I heard, they are human beings. Though if Jonas Brothers: The 3D Concert Experience is any indication, that last bit of information may be open to debate. Like hundreds of teen idols before them, Kevin (the cute one), Joe (the cute one), and Nick (the cute one) are fabrications; they’re crops grown on a farm somewhere in Anaheim, Calif., carefully tended over years and years by Disney geneticists until they were just ripe enough for the palates of tween girls. Everything in their world, both onstage and off, is market-tested and prepackaged, so much so that even a midconcert wardrobe change is choreographed to “catch” lead singer Joe with his shirt off backstage (at which point, I’m pretty sure the 10-year-old girl sitting in front of me in the theatre died briefly from hyperventilation). So what if the Jonas Brothers’ music is abysmal pop-punk, pop-rock, or pop-whatever played without soul or heart? They’re programmed to play songs that sound like a thousand cash registers registering at the same time. So what if they wear purity rings and talk about saving themselves for marriage? The whole point of teen idols is to whip preteen girls into a screaming, fainting, libidinal frenzy for boys who appear to have no libidos and then redirect that frenzy toward the merchandise table. And so what if they distill so much of what’s lousy about America – the blandness, the focus-grouping, the suburban sameness and safeness – into one neat package? They’re built to be throwbacks to a fictional place in our collective unconscious where things were good and decent and wholesome, where young girls could safely walk the streets to the record shop at night to blow their allowances. Jonas Brothers: The 3D Concert Experience had only one job to do, and that was to meet every possible boardroom expectation. And the Jonas Brothers, the Walt Disney Co., and director Hendricks (Hannah Montana and Miley Cyrus: Best of Both Worlds Concert) hit their marks perfectly. As do the thousands of girls in the audience, who, for all their new slang, risqué clothing, and cell-phone cameras held high in the air like blooming digital sunflowers (blooming right in your face, thanks to the miracle of 3-D technology), might as well be bobby-soxers weeping for Frank Sinatra at the Paramount in 1942. They are all part of a great American tradition. Hate them if you want to, but you might as well hate gated communities, The Real World, and the war on terror while you’re at it. 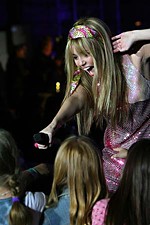 Hannah Montana and Miley Cyrus: Best of Both Worlds Concert Tour
The men don't know, but the little girls understand.