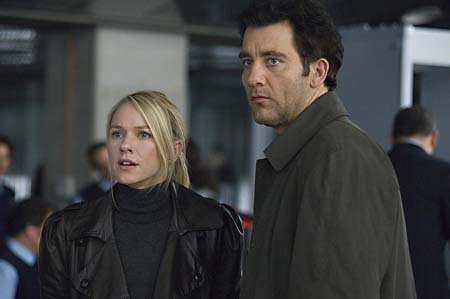 The juiciest moment in any conspiracy movie is the scene in which the hero – usually unshaven and wearing wrinkly clothes – comes face to face with the shadowy figure who knows just how big the whole ugly mess really is. We’ll call it the "Everyone Is Involved" moment, and without it, a conspiracy movie is just a study in paranoia, the story of one person way out on a limb, shouting at the heavens. The man behind the "Everyone Is Involved" moment in The International is Wilhelm Wexler (Mueller-Stahl), a consultant for the International Bank of Business and Credit, a lending titan that specializes in corruption, arms dealing, war profiteering, murder, and the employment of pale European men in dark suits. Wexler’s audience is Louis Salinger (Owen), an Interpol agent who’s been investigating IBBC for years but keeps running into dead ends and dead bodies, no matter which country he goes to (because this isn’t just a White House operation, like the one in All the President’s Men, or a joint White House/Army/Justice Department/Dallas Police Department/Cuban freedom fighter/Supreme Court operation, like the one in JFK). In this conspiracy (helmed by the director of Run Lola Run), everyone really is involved: governments, multinational corporations, military juntas, Hezbollah, drug cartels, the Mafia, the Illuminati, possibly the Masons and the Elks, and on and on and on. This is bittersweet music to the ears of Salinger and his partner in paranoia, U.S. Attorney Eleanor Whitman (Watts), who have scoured the earth – from Milan to Berlin, from Istanbul to New York – trying to convince people that the most powerful bank in the world is really a criminal organization and get nothing for their troubles but shot at and run down by cars. So, we’ve got sinister corporations, political assassinations, chase scenes, poisonings, and gunfights: It all sounds like the makings of a good movie. But don’t be fooled. The International is just passable; it’s a clock-puncher that’s almost entirely free of suspense or surprise. Its action sequences provide just enough thrills to pass muster (though I have to say, whoever thought to set a shoot-out in the rotunda of the New York Guggenheim Museum deserves a drink), its hero is appropriately indignant and disheveled, and its message – about the impossibility of finding justice in a world run by the wealthy – strikes a nice tone of indignant resignation. And yet I couldn’t help feeling that The International was stuck in second gear, like it couldn’t decide whether to be fun or meaningful and so settled for being neither. Maybe it’s hard to build a story around a character as emotionally monochromatic as Salinger. Or maybe the film’s central conceit, about the value of controlling debt in a globalized lending economy, just isn’t sexy enough to get the blood pumping. Or maybe these days, with financial institutions begging at the White House gate like urchins in a Dickens novel, it’s too much to ask audiences to believe that banks are capable of controlling anything, much less everything. 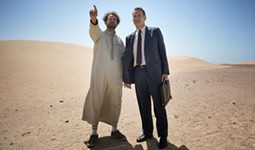