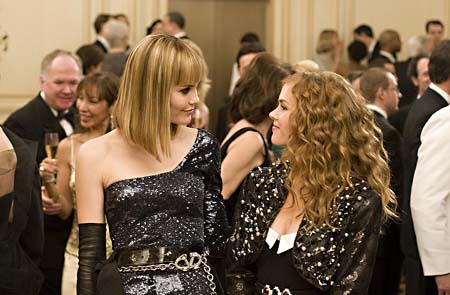 Confessions of a Shopaholic

The girl can’t help it: The shopaholic character, Rebecca Bloomwood (Fisher), may be the invention of Sophie Kinsella’s bestselling novels, but onscreen the character appears to be an immaculate conception born of Bridget Jones and the ladies from Sex and the City. Many have rued the luck of Confessions’ unfortunate release date, worrying that the film’s celebration of conspicuous consumption occurs just as our national consumption has fizzled into anything but conspicuous. That’s hardly the problem with Confessions of a Shopaholic, however. Escapism has never been bound by the strictures of “good taste,” and a chastening comedy about the catastrophic results of unbridled spending could be just what the doctor(s of finance) ordered. No, the problem nipping at the designer heels of Confessions is not the state of the economy but, rather, the film’s predictability. When magazine writer Rebecca loses her job, she is forced to confront her out-of-control credit-card debt and accept a job she literally stumbles into as a financial columnist at Successful Savings. Her first clueless column turns her into an overnight sensation, and she falls in love with her cute and rich-but-would-rather-prove-his-worth-than-buy-it editor (Dancy). Simultaneously, Rebecca still tries to land a job at a prestigious fashion magazine, while also learning lessons in humility from her roommate (Ritter), parents (Cusack and Goodman), and a few deliciously amusing group sessions with Shopaholics Anonymous. Occasional voiceovers, such as the opening and closing window-shopping monologues, offer a hint of the mental processes of a shopping obsessive, and the talking, beckoning store mannequins are as hard for Rebecca to ignore as any schizophrenic’s voices from God. “They said I was a ‘valued customer’; now they send me hate mail,” wails confused Rebecca as she opens correspondence from the stores’ debt collectors. What distinguishes this movie from other interchangeable Renée Zellweger/Kate Hudson/Sandra Bullock career-girl rom-coms is the luminous presence of Isla Fisher. With her tiny frame and massive screen charisma, Fisher commands this film as ably as she wrested comic scenes from Vince Vaughn and Owen Wilson in Wedding Crashers. A gifted physical comedian, Fisher also walks into glass doors, pratfalls, and does battle with her accessories with all the akimbo aplomb of a seasoned star of classic screwball comedies. The giddy wardrobe on which she spends all her phantom money also helps set the tone for her fantastic adventures. (Confession's costuming is the work of Sex and the City's fashion guru Patricia Field.) The adventures in this film are, of course, unrealistic (as are those in most Hollywood comedies). However, while some decry the datedness of Confession's paean to financial overindulgence, there are others of us who wonder how a young journalist's credit limit could ever soar to such multifigured heights and furthermore, in these days of dwindling writing opportunities, manage to jump from one magazine to the next with little effort and even fewer skills. Ah, escapism. 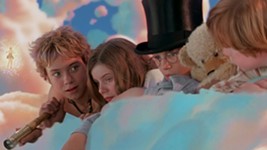 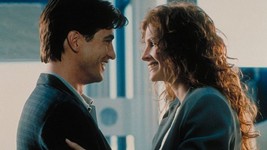