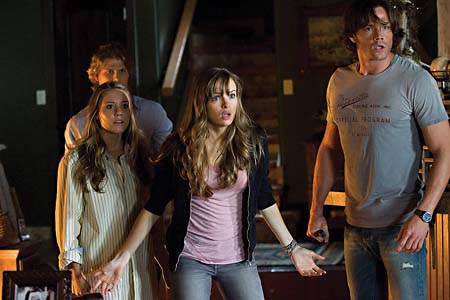 In the tradition of – and with apologies to – longtime Austin Chronicle Friday the 13th franchise reviewer Steve Davis (whose whereabouts are currently unknown, following his courageous decision to finally track down and interview the fabled Wild Man of Borneo some time back), I humbly offer up this tribute to the Cramps' late, great frontman, Lux Interior, in lieu of a proper review. Because, frankly, and with all due respect to series creator Sean S. Cunningham, Kane Hodder (former Jason), and all the girls who faced off against Our Man in the Hockey Mask and won their freedom (or lost their minds, heads, or maidenheads) over the past three decades, this filmed-in-Austin Friday the 13th made my tummy hurt so bad I needed a gallon of bop juice and a new kind of kick just to purge the bland and uninspired goo-goo muck the Nispel and Michael Bay alliance has foisted on a new generation of gore-hounds. To the tune of the Cramps' "The Most Exalted Potentate of Love": "Here comes the madman you've been dreaming of; he's the most exalted potentate of blood; he's got a hockey mask that fits like a glove; he'll be coming ’round the lake to gut your love; he's the most exalted potentate of blood. He's the most celebrated horror hound around, a momma's boy who'll put you 6 feet down; he makes Madman Marz look like Johnny Guitar; he's good with a bow, and he dies real slow; he's the most exalted potentate of blood. But bad, this film's so bad! To flub the fans' most beloved butcher boy. Bad, this film's so bad! It's Bay and Nispel who oughta be destroyed. ’Cause it's Jason Voorhees wrote this book o' death, as he killed and died and then took another breath; but Platinum Dunes ain't Crystal Lake, and everything here is an utter fake, a dullsville yawnfest, a crummy Bay mistake. Mad, this makes me mad. He was the most exalted potentate of blood." 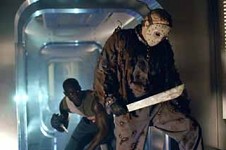 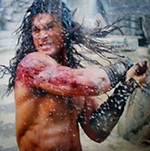 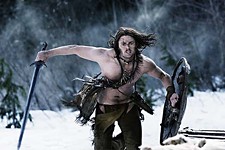 Pathfinder
A Viking movie with this many graphic decapitations shouldn't be such a bore.