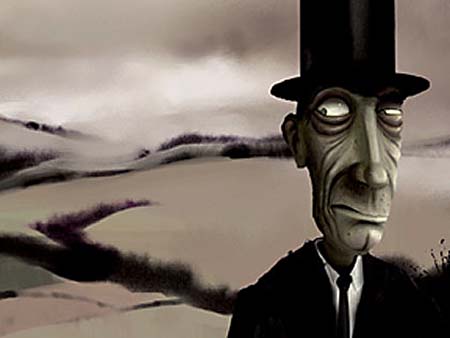 This is always a fun program, and the 2009 collection is no different. Or completely different … and that’s the point; it’s an annual compendium of animated works considered to be among the year’s best. This year's five Oscar nominees, which are presented in the first part of the program, total barely 40 minutes in length, so the program is filled out with an additional five cartoons that have gleaned kudos from other international awards events. These five are presented under the rubric “Highly Commended,” and in most instances, the title is apt. The only dubious entry among this latter bunch is “Varmints” (by Marc Craste of England), an ecology parable that uses a big-eyed, cute animal to posit the simpleminded notion that country life is good and cities are bad. At 24 minutes and at least double the length of everything else in the program, its inclusion seems to be more a time-filler than anything else. Also adding to the overall length are the interstitials between each film that present one-sentence quotes from famous people about the wonders of short films and animation. It’s a lot of superfluous preaching to the choir. Anyone who saw this summer’s WALL-E will be familiar with one of the Oscar nominees, “Presto” (by Doug Sweetland of the U.S.), a funny and lovingly constructed cartoon about a magician and his wily wabbit, which screened before the feature film. “Lavatory – Lovestory” (by Konstantin Bronzit of Russia) and “Oktapodi” (by Julien Bocabeille, François-Xavier Chanioux, Olivier Delabarre, Thierry Marchand, Quentin Marmier, and Emud Mokhberi of France) are both classic short works. In “Lavatory” a female turnstile operator at a public toilet peers under the stalls for the mysterious man who keeps leaving flowers in her tip jar. “Oktapodi,” at just a couple of minutes running time, is a colorful burst of stretchy octopus tentacles put in service of a little chase story. “This Way Up” (by Alan Smith and Adam Foulkes of England) is a macabre and funny story about the bizarre difficulties a couple of top-hatted undertakers experience while escorting a coffin to its grave site. This film by these highly accomplished British animators was funded by The Animation Show’s producers Mike Judge and Don Hertzfeldt. The only Oscar-nominated short that failed to capture my imagination was “Pieces of Love: Vol. 1” (by Kunio Kato of Japan). It tells the story of a solitary man building a house of cubes from the submerged underwater remnants of his old house and life. Of the other films in the "Highly Commended” section, there’s the delightful “John and Karen” (by Matthew Walker of England), which shows a makeup session between a courting bear and penguin; “Skhizein” (by Jérémy Clapin of France), which details the existentialist plight of a Frenchman who believes he’s been knocked 9 centimeters off his axis by a meteorite; “Hot Dog” (by Bill Plympton of the U.S.), one of the well-known animator’s prolific Plymptoons; and the rather ordinary 2005 nominee “Gopher Broke” (by Jeff Fowler of the U.S.). Ultimately, the collection allows us to judge what's best, along with the Academy members.