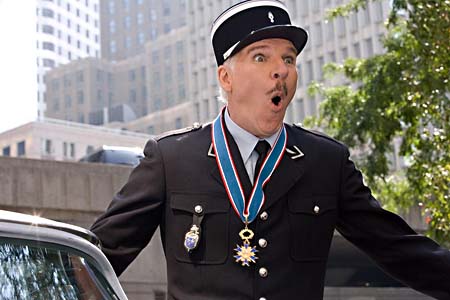 I don’t care how many pieces he’s written for The New Yorker, how often he’s been honored by the Kennedy Center, or how many times he’s hosted Saturday Night Live; Steve Martin is going to have to answer to a higher power for The Pink Panther 2 – as will director Zwart (who should also be punished for Agent Cody Banks, while we’re on the subject); Martin’s co-writers, first-timers Scott Neustadter and Michael H. Weber (who, I’m guessing, will make a tidy career for themselves writing movies they deserve to be punished for); and MGM studios. And maybe even Blake Edwards, depending on how vindictive we’re feeling. In Edwards’ defense, when he was shooting his classic comedies about the bumbling, oblivious Inspector Clouseau in the 1960s and ’70s, he probably never thought that anyone would bother to remake them. Why would he? There’s only so much mileage you can get out of a guy falling down stairs and speaking in a ridiculous French accent before the gag runs dry, and Peter Sellers pretty much got it all. Yet here’s Martin, falling down stairs and speaking in a ridiculous French accent in a sequel to a remake no one ever wanted. This time out, Clouseau isn’t a lone force of legalistic pomposity but part of a “dream team” of investigators from around the world who’ve been assigned to track down Tornado, an international superthief who snatched the legendary Pink Panther diamond, which Clouseau has been losing and retrieving and losing again ever since David Niven was the hottest thing in Hollywood. As in all the other Pink Panther movies, Clouseau is his own odd blend of klutzy and sophisticated, constantly falling ass-backward into forensic revelations while strenuously maintaining his sense of deductive superiority and Gallic haughtiness. Which, again, was funny 40 years ago, when Peter Sellers was the guy doing all the falling and maintaining, but Martin has sucked all the wit out of Clouseau, all the carefully considered comic delusion, and turned him into a blockheaded clown. Watching his overcooked CGI-animated run-in with a spinning wooden office globe (a prop Sellers used to subtle and brilliant effect in 1964’s A Shot in the Dark), I kept waiting for Martin to fall face-first into a pie, somehow losing his pants in the process. A scene like that would have fit perfectly in a movie so committed to the Hollywood-assembly-line-slapstick-and-pottymouth approach to comedy – which is an approach I can accept, if not forgive. What I can’t accept, however, is talents such as Reno, Garcia, Tomlin, and Molina wasting away in a movie like this. As punishment for their complete lack of artistic integrity, all four of them should be forced to sit in a room for all eternity watching The Pink Panther 2 over and over again until their souls cry out for the chance to act in something meaningful, like the next Mike Myers movie. 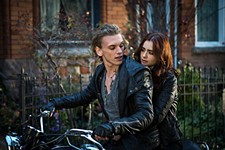 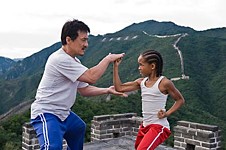