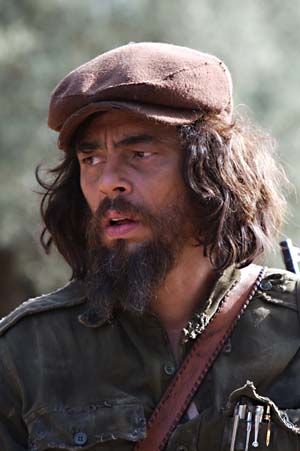 At the start of Steven Soderbergh’s two-part epic about the life of South American revolutionary, guerrilla soldier, and T-shirt iron-on Ernesto Guevara (an epic I feel like I started watching months ago, when I was still young), “Che” looks fresh, clean, and optimistic: the picture of youthful idealism in a guayabera shirt. Nearly five hours (and several armed insurgencies) later, when the Argentine doctor turned hero finally gives up the ghost on the dirt floor of a ramshackle hut in rural Bolivia, felled by a soldier’s bullets, he looks more like an Old Testament prophet after years spent wandering in the desert eating bugs and talking to bushes: still a true believer but beaten down by circumstance and cruel reality. In the second half of Soderbergh’s bold, bloated, rambling, tiring, yet strangely brilliant story of Comandante Guevara, all the confidence of the first film (set during the Cuban revolution of the late 1950s and released here last week) has been shoved out of frame and replaced by a sense of impending doom. Bolivia was Guevara’s Waterloo, his last stand against imperialism. He’d gone there with a fighting force of 50 men in 1966 in an attempt to overthrow the government of President René Barrientos but soon found himself in a yearlong slog through hell. His tiny army had no support from the local communists, meaning they had no political strength; the campesinos who had come out of the jungle to help him and Castro in Cuba 10 years earlier this time rejected the brave-new-world promises of the Argentine carpetbagger in army fatigues, and they showed their displeasure by informing on him and his soldiers. And to top things off, communications were cut off to the band’s supporters back in Cuba, so they had no money and no supplies, meaning as their rebellion dragged on, they became less an ideological force than a group of starving animals, pursued at every turn by the U.S.-backed Bolivian military. So, you’ve got dissension, disaffection, disillusionment, despair, and death: otherwise known in Hollywood as Irving Thalberg’s “Five Ds” of guaranteed box-office success. Luckily for us, Soderbergh is one of those rare directors who’s able to make uninterrupted misery engaging (joining Carl Dreyer, Ingmar Bergman, Werner Herzog, Terrence Malick, and Todd Solondz … and possibly every director who ever worked with Jeremy Irons). Sure, it helps that he’s got the beauty of the Bolivian countryside in his corner and one of the greatest actors in movie history subsuming himself in a legendary and controversial character, but it’s his own aesthetic conviction that life’s insignificant moments are the ones to keep a camera on that allows him to spin history into art and find a little meaning in all the hopelessness.