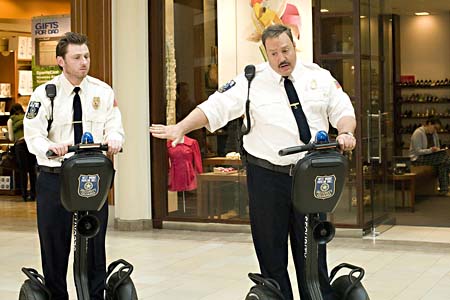 Playing second banana on film has its perks. Happy Madison, the production company belonging to James' last co-star, Adam Sandler, bumped James up from one half of a comic duo in I Now Pronounce You Chuck & Larry to a full-fledged leading man, Paul Blart. In a surprise haul, Paul Blart: Mall Cop came in No. 1 at the box office on opening weekend, so it's guaranteed that we'll see more of TV's king of Queens onscreen in the future. From the premise onward, Paul Blart: Mall Cop revels in fat jokes and the gunless impotency of mall security guards. The movie presumes the image of a fat mall cop patrolling his cathedral of commerce on a little Segway to be endlessly hilarious. Give the character a goofy name like Blart and a dopey-looking mustache, and what more does a movie need to do to hit a home run? The film provides James with ample opportunity for knockabout physical humor, at which the comedian appears reasonably adept yet hardly capable of the surprising gracefulness of a fat comic master such as Jackie Gleason. The plot has Blart proving his mettle when robbers hijack the mall and he becomes the city cops' eyes and ears on the inside. Director Carr (Are We Done Yet?, Daddy Day Care) adds nothing to the overall mix with his rudimentary point-and-shoot visual strategy. Paul Blart: Mall Cop deserves to be cited for loitering. 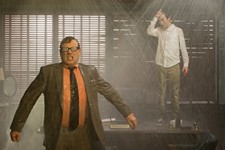