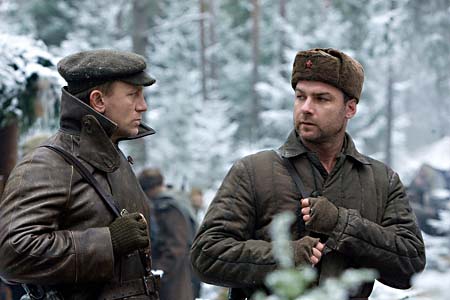 There’s a quote from Voltaire you may have heard – “If God did not exist, it would be necessary to invent him.” Then there’s a quote from a slightly lesser-known writer you probably haven’t heard (because I haven’t written it yet) but that’s nearly as punchy – “If World War II had never happened, Hollywood would have come up with it in a story meeting.” It may lack the Frenchman’s poetry, but I think the sentiment is sound: World War II is the fertile crescent of the film industry, a bottomless well of cinematic possibilities. In the past few months alone, no fewer than six movies about the “good war” have been released, including stories about concentration camp guards (The Reader), an internal plot against Hitler (Valkyrie), black soldiers fighting in Italy (Miracle at St. Anna), and a boy in striped pajamas (The Boy in the Striped Pajamas). For producers looking for a green light and a little awards consideration, World War II is the gift that keeps on giving. And giving. And giving. And still it keeps giving with Defiance, the true story of the Bielski family, three Jewish brothers who, in 1941, escaped into the forest of their native Belarus to elude capture by the Nazis, set up a small ad hoc village, and ended up saving more than 1,200 Jewish lives through daring rescue raids and armed resistance. The story, in other words, is pure Hollywood gold, full of opportunities for stirring speeches, ethical quandaries, lessons about tolerance and humanity, and violence against Nazis. And who better to mine that gold than Zwick (Glory, Blood Diamond), a true expert at squeezing inspiration out of despair and intimacy out of historical catastrophe? Zwick may be the definition of a modern blockbuster filmmaker, but he’s also spent his entire career struggling to find the balance between opposing impulses – the sentimentalist’s desire for emotional-historical heft and the artist’s fascination with conflicted humanity – a struggle that’s all over Defiance. Standing in for the first impulse is composer James Newton Howard, who never met a tender moment he didn’t want to choke to death and who nearly drowns Defiance in symphonic syrup, but representing the second, thankfully, are Craig and Schreiber, who are more interested in psychological ambivalence than unblemished heroism. Howard may want to see brothers Tuvia and Zus Bielski as Moses and Aaron resurrected, but Craig and Schreiber are clever enough to play them as two warring sides of the same coin, humanists and murderers in different proportions, torn between the desire to help their fellow Jews and exact bloody revenge on their tormentors. And Zwick is smart enough to let them play it that way.