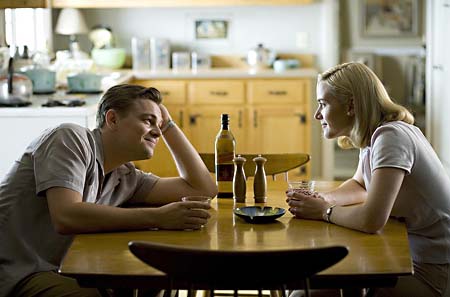 I suppose you could call Revolutionary Road a movie about the killing effects of the suburbs – something director Mendes previously explored in his debut film, American Beauty – but that would be a facile reduction of a film that aims, far more cuttingly, to sandblast the myth of “specialness” – that very American idea that we are all destined for greatness. A seductive opening scene introduces Frank (DiCaprio) and April (Winslet), before they’ve married and moved to Revolutionary Road. In that first meet, they catch eyes across a party. They both possess looks that are better than most and imagination, too. April is studying to be an actress, and Frank saw Paris while serving in the Army. They sniff out in each other a similar yearning – to be different, to live life more boldly than the so-called middle-class automatons all around them. The film then cuts to a half-decade later: The Wheelers are now saddled with two children – who, quite tellingly, are never given a close-up – and a two-story in the suburbs of Connecticut. They're expert brawlers by now, both of them chafing at the expectations of their gender roles. Some detractors have claimed Mendes and screenwriter Justin Haythe have inserted into the film a feminist slant absent from Richard Yates’ acclaimed 1961 source novel. I haven’t read the book, but that argument suggests a righteousness and imbalance of power that don’t exist in the film. The Wheelers are both miserable, both pitiable, simply manifest in different ways (he is feckless, while she is strident; he rationalizes and overemotes, while she turns chilly and shuts him out). You can practically see DiCaprio and Winslet coiling in advance of the starter shot to each monumental screaming match, and Revolutionary Road ranks right up there with Who’s Afraid of Virginia Woolf? in its characterization of a coupling deeply scabrous and defective. But, as with Virginia Woolf, you may marvel at the technique but not particularly revel in it. There's an airlessness to Mendes' picture – a precise match for the manicured lawns, the men's fedoras just so – that doesn't leave much room for error. One slight bobble from the (admittedly very good) leads, and the illusion crumbles. Not a bobble in sight, though, from bit player Shannon, as a mentally unstable neighbor who sees right through the pretty artifice of the Wheelers. Shannon is monstrously good – unpredictable where the other actors are clipped and careful – and he steals the whole picture in two short, shattering scenes. When Shannon exits the film, the air gets sucked out again, and you realize the pretty artifice extends to more than just the Wheelers.